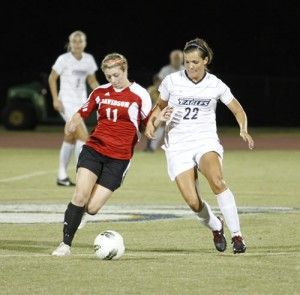 The Eagles go into the tournament with a 10-7-5 overall record. The Demon Deacons challenge that with a 13-5-3 season record.

GSU earned the Southern Conference’s automatic bid into the tournament after winning the SoCon Tournament Sunday.

This is the 16th consecutive year that WFU has earned at bid to the NCAA Tournament, which is the sixth longest streak in the country. The Demon Deacons hold one of the tournaments 16 national seeds for the seventh year running and are one of only four teams to earn a seed in every tournament since 2006. WFU is 10-2-0 at Spry Stadium in NCAA Championship games.

This will be just the second meeting for WFU and GSU with the last having the Demon Deacons come out on top in Spry Stadium in 2002.

The Eagles won the 2012 SoCon Championship Sunday for the first time in GSU history and was the first team to ever win it as the eight seed in the tournament’s history. GSU defeated the third seeded Furman University in penalty kicks, 5-4.