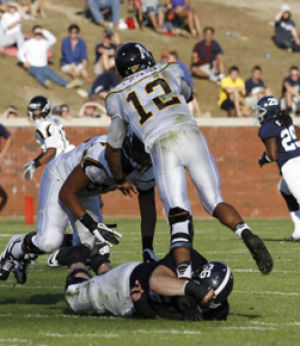 Thanks to a play in the third quarter, with Appalachian State University in possession, senior defensive tackle, Brent Russell has tied the Georgia Southern University sack record with 24 career sacks.

Going into the game against the Mountaineers, Russell was only half of a sack away from tying the record. The moment came when App. State quarterback Jamal Jackson stepped out of the snap to find a receiver, got caught up in the backfield and was taken down by both Russell and sophomore safety Deion Stanley.

Throughout the game, Russell had multiple opportunities to tie and break the record, but fell short by hair every time. He ended the game with only the one sack paired with Stanley. Russell also ended with two assisted tackles.

Russell has been in pursuit of the GSU record over the past three games since he last had a sack against the Wofford College Terriers.

Even though the Eagles are now out of Southern Conference play, Russell still has an opportunity to break the record in the regular season. GSU will face Howard University and University of Georgia before playoff games begin.