Students sink each other, Battleship style 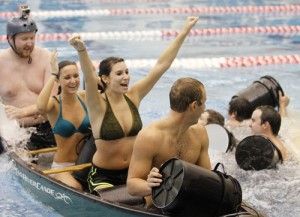 Students took a board game to a real life level at the Recreational Activity Center’s first ever Battleship Competition.

Battleship is a game played at the indoor pool area featuring four canoes and four players in each canoe. Players throw water using a bucket into the opposing team’s canoe in an attempt to sink their boat. The mission of the game is simple, to sink the other team’s battleship before they sink yours.

“I’ve never won anything in my life,” Carly Flom, sophomore civil engineering major and member of “Boats and Hoes,” said. “We for sure thought we would lose since we had two guys and two girls, and everyone else had mainly all guys. It helped us in the end because we had less weight on the canoe and didn’t rock the boat as much as the heavier guys. This was a very exhilarating game.”

“The objective with this event was to create new and exciting ways for students to have fun on campus, and what better way than starting a game as innovative as this one,” Marquez said.

“This has to be the best game I’ve played in my lifetime. I would recommend someone trying to push for this to be a national sport, it’s that much fun.” Curtis said. “Since I transferred here, I really haven’t found reasons to go out and participate in many things, but this event was worth it times ten. Too bad we have to wait a full year for the next one.”

Battleship was a game of strategies that led students to brainstorm about how to win the next time the event will be held.

“I need to be sure to come back to this event next year,” Bryce Johnston, junior exercise science major, said. “This event should be used to teach students teamwork. I noticed that the teams with strategies and less weight on their canoes were the ones who won first and second place.”