Jimmy and Rosalynn Carter to speak at GSU 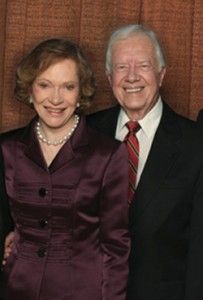 Georgia Southern University will host the 39th President of the United States Jimmy Carter and his wife Rosalynn Carter Feb. 12 at 7 p.m. in Hanner Fieldhouse.

“He’s coming as a part of our leadership lecture series, and it’s really an honor to host a past president, especially one from Georgia,” Jodi Kennedy, associate director of Office of Student Leadership & Civic Engagement, said.

“We could not be more excited to welcome President and Mrs. Carter to Georgia Southern University,” Vice President of Student Affairs and Enrollment Management Teresa Thompson said.

Carter and his wife have not revealed any ideas yet of what the topic of the lecture will be, but it will be in conversation format, Kennedy said.

Carter served as the president of the U.S. 1977-1981. Since leaving office, Carter has gained a reputation as a tireless champion for social justice, according to the news release.

Carter is a University Distinguished Professor at Emory University in Atlanta and is the author of 27 books.

The former first lady has worked for more than three decades to improve the quality of life for people around the world.  Today, she is an advocate for mental health, care giving, early childhood immunization, human rights and conflict resolution through her work at The Carter Center in Atlanta, according to the press release.

She is currently a distinguished fellow at the Emory University Department of Women’s Studies in Atlanta.

Carter will be the second U.S. president to speak at GSU and the visit will mark the first time a president and first lady have visited Georgia Southern together, according to the press release. Former President George W. Bush spoke in 2006.