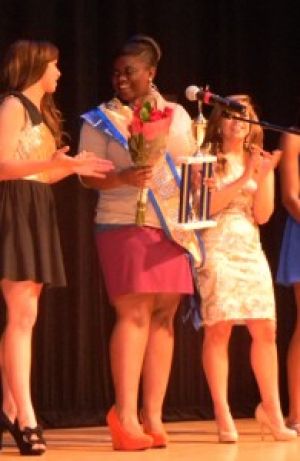 Last night in the Performing Arts Center, freshman vocal performance major Gazzie Fulcher was crowned the 2012 GSU Idol as she showcased her vocal talents in front of a live audience.

“It was a hard decision to make. All of the competitors were very talented, and it honestly came down to which singer was more versatile,” Pulver said

Fulcher is currently dual-enrolled at East Georgia College and Georgia Southern University and has been singing all her life.

“It is so amazing that I have the opportunity to do this. Singing is just a God-given thing, and this was a very talented group of girls. It is a real honor, and it makes me look to the future even more,” Fulcher said.

Of the 14 people that auditioned, seven contestants made it through to last night’s live performance. In addition to Fulcher, Christian Chance, Nicola Fairclough, Emily Faz, Emily Hill, Nita Myles and Jill Taylor all performed in front of an audience of students, friends and family.

“I was amazed at the talent level of this group. I commend them for having the courage to step up and perform in front of their peers and to be judged by us,” Baldwin said.

The competition opened with all of the contestants singing Christina Aguilera’s hit “Stronger.” Each of the seven competitors performed their first song, and five were chosen by the judges to proceed to the second round, where they would perform another song. The audience was then encouraged to vote for their favorite contestant during a brief intermission, and the three who received the most votes would go on to the final round.

Members of the audience donated money in the name of their favorite competitor, which went to the United Way.

“It was a lot of fun, and we raised money for the charity. That was the most important thing to me,” Chance said

The final three competitors were asked to sing the same song in the final round to provide an even playing field on which they could be judged. Etta James’ “At Last” was selected as the final song to be performed.

Rivera said, “We made our decision based on five crucial aspects of singing. Tempo, pitch, song selection, stage presence and diction were all taken into account, and we think Gazzie demonstrated all of these.”