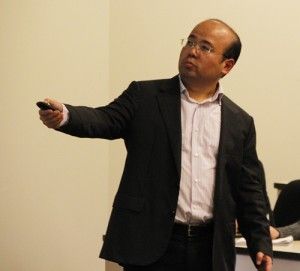 Photo by: Lindsay HartmannDr. Kaiji Chen is an economics professor at Emory University. He spoke at GSU last Friday about modern economics.

Dr. Kaiji Chen, an associate professor of economics at Emory University, spoke to Georgia Southern University on Friday in an effort to enhance students’ knowledge of the fiscal cliff and other economic problems currently facing the nation.

The College of Business Administration’s department of finance and economics hosted Chen’s visit.

“The fiscal cliff will hurt the economy, but if we don’t do anything there will be a mountain of debt,” Chen said.

“Spending cuts will help stabilize the debt-to-GDP ratio. The deficit will also decrease, but if we don’t do anything, the deficit will deteriorate and the government debt will explode,” Chen said.

When economists discuss the budget deficit, they are referring to when government spending is greater than tax revenue, Chen said.

Chen presented multiple graphs and models to the audience, illustrating different factors that could influence the U.S. economy. One model showed that increasing taxes might help reduce the deficit but would have a negative effect on the economy overall.

“Increasing taxes is going to improve the deficit, but that’s not taking into account households. Household saving will decrease, and thus output will decrease. This has a negative impact on the economy,” Chen said.

The Congressional Budget Office’s models frequently leave out some of the most important factors, such as how tax increases effect households and, through households, the entire economy, Chen said.

“If we don’t do anything, capital income tax and labor income tax will increase, and the population growth rate will drop,” Chen said.

One major point that Chen stressed in his speech was that economists and politicians have to look at past economic situations to predict the future of the U.S. economy and that doing so can help the nation make fairly accurate long-term predictions.

“I was overwhelmed—there were so many graphs and numbers. They were hard to understand if you didn’t actually do the research,” Rawlins said.

Ashwini Yadav, a sophomore double majoring in information systems and filmmaking, felt the material was too complex.

“What he said sounds good, but it was above my level of knowledge,” Yadav said.

Dr. Shantanu Bagchi, assistant professor of economics at GSU and organizer of the event, felt that the presentation delivered just what it had promised.

“It was a very useful presentation that really showed that when we talk about the fiscal cliff we only include certain things and don’t factor in changes, such as households’ response to higher taxes,” Bagchi said.

Bagchi also agreed that some of the material presented may have been a little more in depth than most freshmen and sophomores might have been exposed to.

“Some aspects were a little too confusing for students. Chen used a neoclassical growth model, but we don’t teach that model till the third year or even first years of graduate school,” Bagchi said.

Chen received his Ph.D. from the University of Southern California and has had work published in prestigious journals such as American Economic review, the Journal of Monetary Economics and the Review of Economic Dynamics.

Following Chan’s speech, he was presented with a small gift bag from Bagchi.