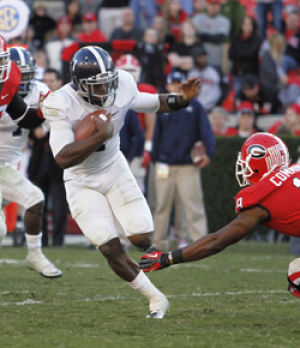 For the fifth time in the history between the University of Georgia and Georgia Southern University, the Bulldogs successfully defended their beloved grass between the hedges, beating the Eagles 45-14.

Aided by two lost fumbles by the Eagles and a massive passing attack on the GSU secondary which netted the Bulldogs 325 passing yards and four touchdowns from quarterback Aaron Murray through the first three quarters. The Bulldogs found themselves with a 38-7 lead over the Eagles going into the fourth quarter.

The Eagles did make it to UGA territory during the fourth quarter, they even faced a fourth and three from the 23-yardline. On that play, McKinnon scored his second touchdown of the day, bringing the score to 38-14 UGA.

When UGA took over with 6:41 remaining in the game, they started bringing in second string players. The Dawgs put together a drive that was capped off with a 13 yard touchdown to Justin Scott-Wesley to bring the final score to 45-14.

When the Eagles came out at halftime, they started their possession at the 18 yard line. They got one yard and went three and out.

In the first half, the Eagles managed to tie the game at seven and remain within a field goal of until right before the half, when UGA scored a touchdown to go up 17-7.

The Bulldogs would start a drive that stretched 69 yards, 12 plays and eat up 4:20 off the clock.

On third and 15 on the GSU 36 yard line, Gurley weaved his way up the middle of the field to pick up a first down, putting the ball at the GSU 17 yard line. Two plays later, Murray would air the ball out to Chris Conley for a 14 yard touchdown, advancing the Bulldog lead to 24-7.

The next offensive possession for the Eagles seemed to be even worse for GSU, who again went three-and-out losing a yard and bringing the total offense from GSU during the second half to zero yards.

UGA scored easily during their next 3-play possession after Murray threw a 43 yard pass to Tavarres King to put the Dawgs up 31-7.

The Eagles started moving the ball better, gaining 19 yards before sophomore b-back Dominique Swope ran into a teamate and fumbled the football giving the ball back UGA with a short field at the GSU 45.

Shortly after, Chris Conley added another touchdown for the Bulldogs, catching a 33 yard touchdown from Murray, bringing the score to 38-7.

GSU ties the game but fails to close the half strong, down 17-7 at halftime.

The first quarter wasn’t as bad as everybody thought it’d be. Sure, Aaron Murray was efficient, going five of eight for 121 yards and Todd Gurley did have a touchdown to put the Bulldogs up 7-0 early. After that, both teams committed turnovers and seemed to go with the “safe bet” plays.

GSU had the ball going into the second quarter and the Eagle offense came alive. Converting two third downs along the way, the Eagles would go on to score thanks to a one yard touchdown from McKinnon. The UGA defense stood after the play, appearing to be reflecting on what had just happened.

When the Dawgs finally got the ball back, they responded with energy.  UGA put together a defense-testing 11-play drive but when they got to the Eagle redzone, Murray took a sack on third and 8 to set up a 37-yard field goal that put UGA up 10-7.

During the next drive, one that would take the Eagles to a 3rd and 8 from the UGA 13, it appeared that the UGA defense was starting to adjust well to the GSU triple-option, after every pitch to the outside the Dawgs were ready, waiting for the Eagle on the edge.

With a 1:12 left in the half, the Eagles would make it six yards on that third down face a fourth and one. Head Coach Jeff Monken would elect to go for it, making a huge statement to the hostile fans at Sanford Stadium. Seemingly caught off-guard, UGA head coach Mark Richt took a timeout of his own. GSU would have made the first down if it wasn’t for a costly 15-yard chop-block penalty. The Eagles would be forced to kick the field goal. Freshman kicker Alex Hanks would go on to miss the 39-yard field goal, giving UGA possession with 59 seconds left in the half.

The Bulldogs looked to put more points on the board before having to kick-off to the Eagles after halftime. With four seconds left in the half, freshman running back Keith Mitchell caught a 24 yard pass from Murray.

The battle between the hedges began with the Bulldogs in control of the first possession. The University of Georgia came out strong. On a 4th and inches from the GSU 5-yard line, the Dawgs made the conversion and three plays later freshman running back Todd Gurley was able to put UGA ahead, 7-0.

When Georgia Southern University finally got the ball, they came out of the gates looking to establish the triple-option. For the first few downs, it seemed the Eagles would be able to consistently beat the Dawgs to the sidelines and take the edges. When GSU got to Bulldog territory, the Eagles seemed to run into a red brick wall. The Eagles would end up going for a 4th and three but fail to make the conversion, giving the ball back to UGA on their own 33 yard line.

During their second possession, the Dawgs spread the Eagles out all over the field and there were open receivers left and right, simply outrunning their defenders. Thanks to a false start penalty on the UGA offense the drive the Bulldogs were held to a 51-yard field goal attempt. The kick was missed and Darreion Robinson returned the missed kick to the UGA 41-yard line, virtually giving the ball back to the Eagles where they previously lost it.

Thanks to the short field, the Eagles were given favorable chances to score, when junior quarterback Jerick McKinnon went to throw the ball, he simply dropped it, leading to a fumble, resulting in a recovery by the Bulldogs and a start of their third drive of the day from their own 33.

Not soon after, the Eagle sophomore Deion Stanley would strip the ball from a UGA receiver and the Eagles would recover a fumble of their own. Starting their last drive of the first quarter from the GSU 45-yard line.