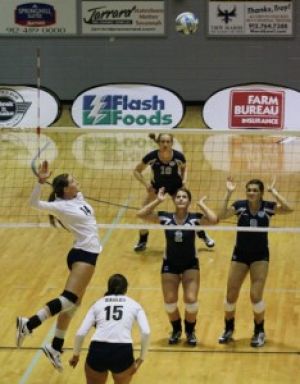 The Georgia Southern University volleyball team (20-6) returns home to play Western Carolina University (8-19) on Saturday at 7 p.m. and Davidson College (9-13) on Monday at 6 p.m. in hopes to continue its eight game win streak.

The Eagles have won eight consecutive matches coming in to this match against WCU, making GSU 11-1 in the Southern Conference and first in the SoCon south division.

The eighth win of the streak was the Eagles’ 20th win of the season, which has only happened 10 times in GSU’s history. WCU is coming off of three losses against teams that GSU has previously defeated.

After daybreak, the Eagles face the Wildcats who are 5-7 in the conference and hold a 3-6 record on the road. Before facing the Eagles, the Wildcats have to take on Appalachian State University, which pose as a threat, as well as GSU who already defeated the Wildcats once.

Up at the net, junior outside hitter Caroline Brown has posted 313 kills and junior middle hitter Tindall Sewell has posted 228 kills. Defending for the Wildcats is senior libaro Molly Crenshaw with 438 season digs and Brown with 334 season digs.

GSU and DC are equally matched when it comes to serving abilities. Junior outside hitter Caroline Brown leads DC in service aces with 26 so far this season, averaging .30 per set.  Leading the Eagles is Beecher with 27 and averaging .27 per set.

Continuing to finish GSU’s final home games of the regular season, the Eagles will be playing Furman University on Friday, Nov. 9 at 6 p.m. and Wofford University on Saturday, Nov. 10 at 6 p.m.

Jackie Gutknecht contributed to this article.