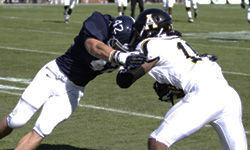 The Eagles rode a wave of emotions among penalties and missed chances en route to a 31-28 loss to Appalachian State University that included three missed Eagle field goals.

After an explosive first half, the game settled a bit and the only touchdown during the third quarter came during a lead change when the Eagles scored 7 points thanks to a Youyoute scamper. Both teams did miss a field goal and the game went into the fourth quarter with the Eagles on top, 28-24.

The question that has arisen during this quarter is what will happen at the end of a game, GSU has allowed App. State to remain in this game.

With 11:25 to go in the game, Jamal Jackson scored another passing touchdown for 23 yards and the Mountaineers quieted the crowd going up 31-28.

From there the Eagles struggled on offense, failing to convert a third and 4 so it was up to the GSU defense to make something happen.

On a huge 3rd and 2, App. State tried to run a trick lay but it was spoiled. Eagle Nation was silent as Brent Russell went down he was able to walk off the field and App. State was forced to punt after a false start on a 4th and 2.

The Eagles, down 31-28 received the ball on their own 10 yard line with 7:46 to go in the game. It was important that the Eagles put together a touchdown drive if they were looking to escape the game with a win.

The Eagles were chipping away 3-5 yards at a time and it appeared they were looking for this drive to put them ahead while giving App. State as little time as possible.

On third and 5, McKinnon evaded a sure sack and threw the ball 27 yards to Robinson, saving the drive, and possibly the game.

The game came down to a 4th and 3 on the 22 yard line with 1:35 to go. Down 28-31, Monken and his staff had to decide whether to trust his offense, or kick a field goal to tie the game. Monken eventually went for it but the play got called back for an offensive facemask penalty.

On 4th and 14, the game came to a close, App. State cornerback  Troy Sanders picked of a McKinnon pass with 53.8 seconds to go.

From there, App. State ran the clock down to take a win that left Paulson stadium with a sour taste in the mouth of the 22,155 attendees of the shocker.

The first half included over 300 yards of offense from both teams, each team with  a major contributor. For the Eagles, William Banks had 103 yards in the half and provided the only three touchdowns for the Eagles. App. State had the luxury of depending on Sean Price, who as a freshman receiver amassed 157 yards and a touchdown off only five catches. After all that action, the score was 24-21 with App. State ahead.

The second half would give the Eagles the ball first and shortly through the first drive, McKinnon would come off the field limping and Youyoute, who had gotten banged up going into halftime, took his place. From there, gains by the eagles were merely chips into the App. State defensive line and the Eagles were looking at a 3rd and 8 from the App. State 30 yard line.

Johnathan Bryant weaved through the Mountaineer defense and picked up 25 yards and a first down to give the Eagles a first and goal from the 5-yard line. After a holding call that backed GSU up to the 12-yard line. Youyoute took the ball to the goal line and gave the Eagles the lead, 28-24.

The Eagle defense was dominant and whatever was said during halftime had an effect on them. App. State fumbled the ball on their own 21-yard line and senior linebacker John Stevenson, who forced the fumble, recovered it on the 21 yard line.

With the short field, the Eagles featured McKinnon who made his way back into the game after getting his ankle taped. The Eagles only managed to get to the 10 yard line.

Alex Hanks missed his third field goal of the game. One of them missed wide-right, one of them got blocked, and one missed wide-left, all from within a 30-yards.

Thanks to a 9 yard sack by Dion Dubose, and another sack by Javon Mention the Mountaineers were facing a 3rd and 29 from a very controversial spot on the 1/2 yard line.  From there, App. State got a 67-yard completion down the field.

The third quarter ended with a 14 yard sack by Brent Russell and Deion Stanley, which moved Russell into a share for the lead in career sacks at GSU.

App. State winning offensive battle after first half, Eagles down 24-21.

After a monstrous first quarter performance by William Banks, who scored two touchdowns for the Eagles, the Eagles went up 14-3.

The Mountaineers proved they were not to be taken out of the game so early as they put together an impressive touchdown drive during the first drive of the 2nd quarter that brought them to within four points of the Eagles, 14-10, with 13:36 left in the first half.

GSU head coach Jeff Monken and his staff have continually mixed up their quarterback and it worked out for the Eagles because Ezayi Youyoute took a snap and handed it to McKinnon, who took the ball for a 42-yard gain. The drive was eventually halted by a 3rd and 6 from the App. State 12-yard line. The Eagles and freshman kicker Alex Hanks would attempt a 23-yard field goal but the kick would sail wide and the score would remain 14-10.

After starting with the ball on their own 20 yard line, the Eagle defense played strong and only gave up 8 yards and GSU would recover the football with 7:11 left in the 1st half from their own 20-yard line.

From there, the Eagles would rely on their bread and butter, the triple-option. The drive would end after a 36-yard touchdown from Banks, his third of the game. The Eagles went on top 21-10 with 4:53 in the half.

The Mountaineers remained headstrong, on a 3rd and 3 Jackson completed a pass to Sean Price who took it to 56-yards but the play did not come with out criticism. It appeared on the replay that Price had stepped out of bounds but nothing could be done about it. The score remained close at 21-17.

After a mishandled pitch, McKinnon ended up fumbling the ball and App. State looked to take advantage of another chance to score before the half with 1:30 left.

With 50 seconds left, App. State took the lead from 9 yards out. The mountaineers only used 41 seconds to drive 51 yards and it appeared the air was sucked out of Allen E. Paulson Stadium as App. State took a 24-21 lead.

While the crowd may have been shocked, the Eagles weren’t and they were determined to score before the half, when they would receive the ball again. Ezayi Youyoute was given the ball to air down the field and with 17.3 seconds the Eagles found themselves on the 14-yard line threatening to score.

Youyoute would subsequently get hurt and along with him coming off the field, along came any Eagle threat of a touchdown before the half. Hanks would go to kick a 24-yard field goal to tie the game but it was blocked and the Eagles made their way to the locker room.

For many people, the Appalachian State game is the most important game of the season and it’s finally here.

The Mountaineers came out of the gates with the ball and a very balanced offensive play selection but they only managed to kick a field goal and go up 3-0 after the Georgia Southern defense stuffed App. State.

During the Eagle drive of the day, GSU was facing a tough 3rd and 12 but William Banks ran hard and ran through multiple App. State defenders to open up a first and goal on the 8-yard line. Two plays later, Banks dove into the endzone and GSU took the lead 7-3 with 4:40 to go in the first quarter.

During  the next App. State drive, it became obvious that head coach Jerry Moore was looking to open the field up for his rushing game and Mountaineer QB Jamal Jackson completed a 42-yard pass down the field to freshman receiver Sean Price. After this play however, the Eagle defense and Eagle Nation teamed up to provide a loud environment that yielded false start penalties. They weren’t intimidated and went for it on 4th and 9 on the GSU 30 yard line but Jackson got stuffed and the Eagles recovered the ball on their 40 yard line.

Junior quarterback McKinnon threw ball down the line 40 yards to sophomore receiver Zach Walker, who made another one-handed spectacular catch similar to his play last week. The following play, Banks took the ball 20 yards out for a touchdown and the Eagles went up 14-3.