GSU looks to soar for seven 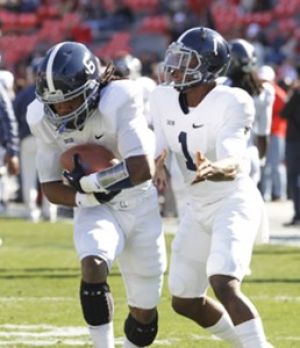 If all goes well this Saturday, a seventh flag could soon fly over Allen E. Paulson Stadium.

Georgia Southern University begins their quest for that seventh national championship during the second round of the FCS Playoffs against the University of Central Arkansas.

UCA hails from the Southland Conference and was the conference champion coming in with a record of 9-2 overall and 6-1 in league play.

GSU received the No. 5 national seed after a successful season of an 8-3 record overall and 6-2 in the Southern Conference.

The Bears are currently on a six game winning streak with their last game being a 48-30 win against Eastern Illinois at home.

The Eagles lost their last game against in-state FBS opponent the University of Georgia by a score of 45-14.

GSU has been dominant this year sporting a 5-1 record at home.

UCA has struggled a bit on the road this year with a 3-2 record when travelling away from Estes Stadium. However the Bears are 3-0 when playing top 25 opponents.

Players to watch for on UCA:

Junior quarterback Wynrick Smothers has thrown for 2,852 yards this season along with throwing 31 touchdown passes while only being intercepted nine times. He is also second on the team in rushing with 370 yards and three scores.

Senior linebacker Seth Allison is second on the team in tackles this year with 80. He also leads the team in forced fumbles (3) and has two interceptions.

Redshirt Freshman defensive lineman Jonathan Woodward has a team leading seven sacks this season while also leading the team in fumble recoveries with three, with one of those fumbles being returned for a touchdown.

Players to watch for on GSU:

Junior quarterback Jerrick McKinnon leads the team with 1,162 rushing yards and 13 touchdowns. McKinnon is coming off of consecutive games where he has rushed for multiple touchdowns on the ground.

Senior linebacker John Stevenson is near the century mark in tackles as he comes into this game leading the team with 94. He also is atop the team list in forced fumbles (2) and fumble recoveries (2).

Both teams are high-powered offenses with UCA coming into this game averaging 36.5 points per game while GSU averages 35.4 points a contest.

Both defenses are also similar as the Bears allow 22.4 points per game while GSU concedes around 21 points a game.

This will be an interesting game because both teams play completely different styles of football. UCA is more pass oriented and will air the ball out, while GSU will stick to their bread and butter of a steady dose of triple option offense.

Defensively UCA is stout against the run giving up only 137 yards per game and give up most of their yards through the air (232 yards). GSU is also very good against the run only allowing 130 yards, however they have given up 198 yards in the passing game.

This will be an interesting matchup between two teams of similar stature; whichever defense is able to slow down their opponent’s style of offense will be at a major advantage in this game.