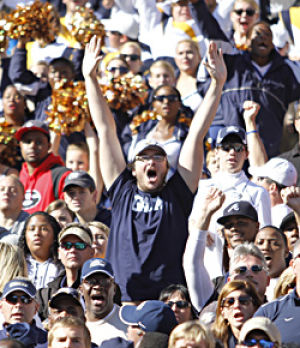 The Georgia Southern University football team entered the game against the University of Georgia on Saturday having already secured at least a share of the Southern Conference title.

Eagle fans will be happy to know that despite the 45-14 loss to the Bulldogs, the Eagles were able to win the automatic bid from the SoCon to the playoffs.

Earlier in the day, Furman University lost to the Citadel, who advanced their record to 5-3 in the SoCon, moving into a share for fourth place.

Since there was a three team tie at 6-2, the record of the fourth place teams against the top teams in the conference was to be used as a tie breaker.

The records of Wofford College, Appalachian State University and GSU were taken against each other and since they all had one loss against at least one of the other three teams, it would go down to how those two teams did against the fourth place team, which was Samford University.

Since Wofford lost against Samford while GSU and App. State didn’t, that would eliminate Wofford from the tie-breaker and App State would win it because the Mountaineers beat GSU to own that tie-breaker.

When Chattanooga and the Citadel won their games on Saturday, they moved into a share for fourth place along with Samford. When the records were taken, the top three teams in the conference all had one loss against one of the fourth place teams.

Since that was tied, the tiebreaker goes down to the number of conference points allowed.

GSU gave up the least amount of points against in-conference opponents so they by rule won the automatic bid to the Football Championship Subdivision playoffs.