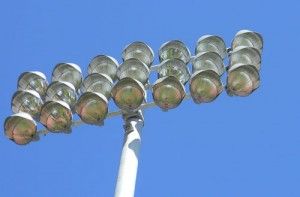 Photo by: Yendi ReidStadium lights were turned on for the first time at Eagle Field on Oct. 3, 2012. The first night game in GSU history was played Oct. 12 against Elon.

New lights were installed at Eagle Field and turned on for the first time on Oct. 3 with the men’s and women’s team in attendance.

“There have been discussions about new lights for years, but there wasn’t any money in the budget,” men’s soccer head coach Kevin Kennedy said.

GSU was one of the only Division I soccer programs without lights at their playing field.

“It was a much needed update for our facility,” women’s soccer head coach Lindsey Vanderspiegel said.

Both coaches believe the new lights will be beneficial to the soccer program.

“We’re excited to have a facility that can host games in the evening,” Vanderspiegel said. “Now we will be able to host SoCon and NCAA tournament games as well.”

Coach Kennedy sees the new lights as a great recruiting tool and now players won’t have to miss class time due to previous home games starting at two or four in the afternoon.

The new lights are beneficial for not only the players and coaches but the many fans and supporters also.

Attendance is expected to increase because students won’t have to miss class time with the later 7 p.m. start times. This past Friday, 938 people attended the men’s game against Elon University which shattered the previous attendance record. This was the first night soccer game ever held on the GSU campus.

The fan experience will also improve simply by avoiding the brutal afternoon heat that Statesboro is known for.

“It will create a better atmosphere at the games,” Vanderspiegel said.

The men’s soccer team will host night games against the University of North Carolina at Greensboro tonight and Furman University on Tuesday, Oct. 23. Both games will start at 7 p.m. at Eagle Field.

The women’s soccer team will host night games against Furman on Friday, Oct. 19 and Davidson College on Wednesday, Oct. 24. Both games will start at 7 p.m. at Eagle Field as well.