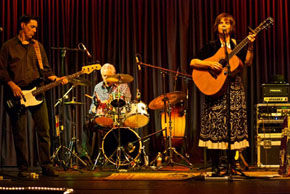 Laura Monk and High Cotton will preform on Fri. Oct. 5 at 7:30 pm in the Averitt Center.

Tomorrow at 7:30 p.m., the sounds of Americana with a twist will fill the halls of the Averitt Center for the Arts as Laura Monk and High Cotton take the stage.

The four piece group hailing from Atlanta will play its first concert since newly releasing its second studio album, “So Far,” as well as other tracks that have gained the band notoriety across the southeast.

“We are excited about it. We have all worked very hard. There are a lot of things you can do in the studio that you can’t do live, but we try to keep the live experience equal to the CD player experience,” Laura Monk, lead vocalist in the band, said. “This album shows how much we have gelled together as a band over the years.”

“We booked the act based on their reputation in the state of Georgia. They have a very original sound,” Chapman said.

“We will be playing songs from our first and second albums, as well as some fairly obscure covers. The first half of the show will be an intimate ‘welcome to our living room’ acoustic set, and then we’ll move the furniture out, and turn it up,” Monk said.

“I am particularly excited about ‘Poor Wayfaring Stranger,’ it’s usually performed as a dark song, but we’ve perked it up a bit,” Monk said.

Since 2003, Laura Monk and her husband, bassist John Monk have been playing music together. The duo became a trio in 2005 when drummer P.J. Engeman joined.

Lead guitarist Dan Foster became a member of the group in 2007 and completed the current lineup.

“All four of us write the music, which adds a lot of variety to our songs,” Monk said.

They have a very original sound, and they play a lot of original music. The Averitt feels that the public will enjoy the concert, Chapman said.

The band will have physical copies of “So Far” available for purchase, as well as digital download cards and other merchandise. Admission is $10 with a valid student I.D., and $15 for non-students over the age of 12.