Eagles gear up to face Paladins and Terriers 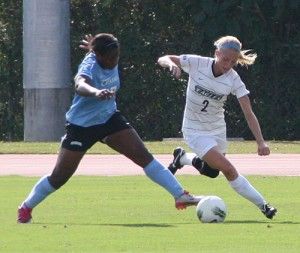 Photo by: Lindsay HartmannFreshman defender Renee Nance (2) keeps the ball away from a Citadel player.

The Georgia Southern University women’s soccer teams will gear up for battle at home this weekend against the Furman University Paladins and the Wofford College Terriers.

GSU will be looking to put an end to its three game skid as they battle Furman tomorrow.  A win would halt Furman’s two-game winning streak and give the Eagles a much-needed boost in the Southern Conference standings.

The net was unkind to the Eagles in North Carolina last weekend as the team was shut out twice.  Sophomore forward Sydnie Van Curen’s five goals are the most for GSU this season.

Furman freshman forward Stephanie Devita has terrorized the SoCon with a division-I leading 16 goals.  GSU will have its hands full as she has scored in all but three games.

GSU has gone 0-3 the last three times it has locked horns with Furman, and the team can’t afford to look ahead to Sunday’s game against WC.

WC hasn’t notched a win in its last five games, but could be looking to exact some revenge as the Terriers football team fell to the Eagles 17-9 last Saturday.

WC has managed a 1-5-2 record in the SoCon and a 6-7-2 record overall.  Junior forward Emily Bougas leads the offensively challenged Terriers with three goals this season.

Goals have been hard to come by for both teams, but one well-placed shot could shake up the SoCon standings.  With a win and a College of Charleston loss GSU could find itself tied for seventh in the SoCon with its final two games coming at home.