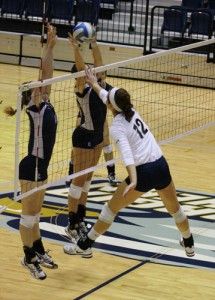 Photo by: Mark Barnes IISenior outside Meredith Paskert spikes the ball against Citadel.

The Eagles started out their weekend at ASU and played four sets against the Mountaineers with set scores of 25-20, 25-15, 21-25, and 25-19. GSU took control over the game in two sets in particular. The second set, the Eagles scored nine consecutive points after the Mountaineers first point, creating a lead that was too strong for a comeback. Then again in the fourth set, they were leading 12-11 but then broke away with an 11-4 run taking the win.

The big playmakers this match were Meredith Paskert with 16 kills and Nicole Jeschelnik with 13 kills and 12 digs. GSU held the Mountaineers to a low hitting percentage of .158 with a combined 13 blocks and 26 block assists.

GSU continued this performance when they headed to Davidson University sweeping them with set scores of 27-25, 25-13, and 25-18. The first set of the match was tied at 25-25, but Jeschelnik and Kate Van Dyke overcame the Wildcats and ended the set with two kills. After this set, the Wildcats could not stop the Eagles and lost several opportunities to take the lead due to an Eagles 9-3 run in the second set and a lead by five in the third set.

Paskert had another strong match with 13 kills, seven digs and four service aces. Following in her success, was Van Dyke with 39 assists, five digs, three service aces and six kills, as well as, Moriah Bellissimo with 15 kills, eight digs and in the second set she served four consecutive points leading up to her ending the set with a kill.

GSU will be playing at home against University of North Carolina at Greensboro on Saturday at 1 p.m. and Elon University on Sunday at 2 p.m.