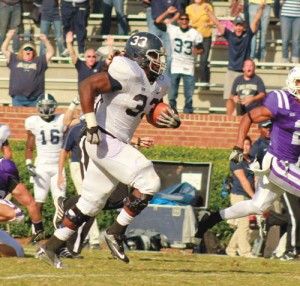 The Georgia Southern University Eagles struggled early and found themselves playing from behind against the Furman University Paladins but dominated after halftime to take a 38-17 victory on Saturday.

Down 7-3 at the half, the GSU offense came alive halfway through the third quarter and went on to score 35 points in the second half, strengthening their first place position in the Southern Conference.

“I told our guys all week, don’t expect to see a team that’s going to roll over for you because you beat them badly last year. That doesn’t happen very often in the Georgia Southern-Furman rivalry,” head coach Jeff Monken said.

The Eagles are 5-1 in the SoCon and 6-1 overall. The postseason picture will be clearer next week after GSU plays the University of Tennessee at Chattanooga next week.

A big question mark facing the Eagles this season has been whether or not they could make any necessary passes to keep drives going. GSU came into the game ranked 121st of the 121 teams in the Football Championship Subdivision in passing.

During the game at Paladin Stadium on Saturday, the Eagles were able to answer some critics after passing for 165 yards on the day. Some critics would argue that 165 yards isn’t very many but the Eagles were also efficient, completing six of 10 passing attempts, avoiding interceptions and scoring a passing touchdown.

“We’re going to call whatever we need to that we think will win the football game.” Monken said. “We needed to try to soften them up a little bit, and that’s what play action pass does.”

The one touchdown came when junior quarterback Jerick McKinnon, who had a career-high 119 passing yards, threw a pass over the Furman defense to Zach Walker for a 75-yard touchdown during the third quarter.

“Just airing it out and getting more comfortable throwing the ball, that’ll help a lot,” McKinnon said.

The passing game was helpful in keeping an aggressive Paladin defense, which was having a lot of success stuffing the GSU triple-option. Furman head coach Bruce Fowler has had a lot of experience with head coach Jeff Monken and his style of offense.

In the first half, McKinnon was held to negative one yards rushing and overall the Eagles had only rushed for 81 yards compared to Furman’s 99 yards. The two teams played a completely different game after halftime.

By the end of the game, the Eagles finished with 275 yards rushing and four touchdowns on the ground. McKinnon started the party, scoring a rushing touchdown during a 13-play drive.

Junior A-back Johnathan Bryant broke loose for a 42-yard touchdown with 10 minutes left in the game. This is when the Eagles really started to provide some breathing room on the scoreboard.

Shortly after, sophomore B-back Dominique Swope scored his first touchdown of the game, to bring the score to 30-10.

Furman responded with a statement that they would not go down easy and simply hand the Eagles the game. While only using 3:10 off the clock, the Paladins drove 85 yards down the field and Furman running back Jerodis Williams scored a touchdown from two yards out to bring the score to 30-17.

During that drive, freshman quarterback Reese Hannon completed six straight passes for 81 yards down the field. He finished the day 19 of 26 and 184 yards. The most impressive of his day was that he did not take any sacks to the Eagle defense.

Furman attempted an on-side kick to try to get the ball back, but GSU recovered it looked to start running the clock out.

With 20-seconds left, Swope scored his second touchdown of the game to provide a nail in the coffin. Swope finished the day with 67 yards rushing off 16 attempts. He also kept his streak of games with a rushing touchdown to eight games.

Many people were surprised that Monken decided to go for two at the end of the half. He was merely trying to put the Eagles three scores ahead of the Paladins and he was not trying to run the score up, he said in a post-game interview.