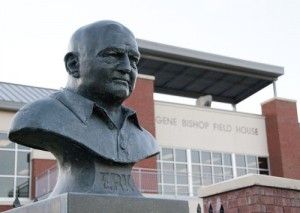 Photo by: Lindsay HartmannErk Russell movie is set to start filming this summer. Students and community members are strongly encouraged to participate.

Producers of the upcoming Erk Russell movie are looking to the Georgia Southern University student body and the Statesboro community for extras to start filming this summer.

It’s been 30 years since Erk Russell coached at GSU. Now with the current hype about the university joining the FBS, James Kicklighter, GSU alumni and director of the film, feels that making a movie about GSU’s most famous coach would be a great idea.

“Erk Russell is one of, if not the finest human beings I have ever had the chance to write, talk or walk with,” Ric Mandes, who helped Erk Russell write Erk: Football Fans and Friends and who is one of the main sources of information for the movie, said.

Instead of outsourcing to individual casting companies, Beau Turpin, GSU alumni and producer of the film, is looking to the local community.

“I’m really planning on having the students to be heavily involved in this process,” Turpin said. “I think it will be a wonderful opportunity for them to be a part of a major film set of something that is the reason Georgia Southern is what it is today. Without football, the school would not be anywhere near the caliber the university is today.”

“I think we can utilize the school, not just come in and view the location, but something more exciting. I think I’m going to try and involve the students as well,” Turpin said. “We’ll want everybody to be in the film and be extras.”

“We want the students to be as involved as possible,” Turpin said. “If all the extras were students and faculty, or related with the school, that would be wonderful.”

If casted, there will be many big opportunities for students as extras. Not only will students be able to be a part of the game day crowd but players on the sideline as well.

“What you do with these types of stories is that you have your specialty players. They’re doing all the hitting and actually playing all the football,” Turpin said. “That’s completely separate from the extra people that are just standing on the sidelines. So there will be opportunities to fill in some ‘extra players on the sideline’ roles.”

Citizens of Statesboro are welcome to be extras as well.

“We will also be involving other members of the community,” Turpin said. “I want Georgia Southern and Statesboro to all be involved. When we do the big game scenes, we will want everyone to come out.”

The dates for filming haven’t been finalized yet, according to Turpin.

One thing that Turpin and Kicklighter want to make sure of is that the movie is in the hands of GSU.

“An Erk Russell film is a project that I have wanted to do for many years,” Kicklighter said. “It’s one that I have looked at for at least five or six (years), but I wanted to wait until I had the proper resources to do the story properly.”

Erk Russell meant a lot to members of the GSU community. Apart from bringing football to GSU, he also led the Eagles to three National Championships during his nine years as head coach of the Eagles football team.

Both Kicklighter and Beau Turpin want the film to be a truthful representation of Erk Russell’s life.

“The story is going to be very true; it’s a very truthful story. It’s not something that needs to be made up,” Turpin said. “We’re going to show who Erk Russell actually was. It’s something I want to make sure is done right because that was Erk’s one rule: to ‘Do Right.’”

“The Erk Russell story is an underdog tale, and I think that every time in his life that he needed to overcome a challenge that seemed insurmountable. Erk Russell always achieved,” Kicklighter said. “And I think when you are telling that kind of story, there’s not much that you have to sensationalize; the drama is pulled from real life.”