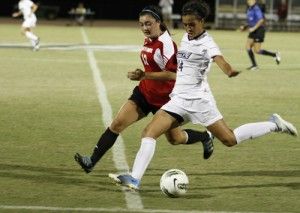 The Eagles took an upset victory over UNCG for the second-straight year in the opening round of the SoCon Women’s Soccer Tournament.

Freshman midfielder Nora El-Shami scored the game-winning goal unassisted with 1:48 remaining in the game to take a 1-0 victory over UNCG.

This was El-Shami’s fifth goal of the season, and she is now tied for team leader in goals with sophomore forward Sydnie Van Curen.

UNCG took the majority of shots, leading the Eagles 12-5 in the total shot count. It was the Eagles’ junior goalkeeper Katie Merson who kept GSU in the contest, making four saves with three of those in the second half.

El-Shami took four of the shots on goal and junior forward Alex Murphy tallied one shot as well.

UNCG gave away its first goal since Oct. 5, ending a run of six-straight shutouts.

With the win, GSU advanced to the SoCon Semifinals and a matchup with Elon University on Friday in Birmingham, Ala. The tournament, hosted by Samford University, continues Friday night.

Jackie Gutknecht contributed to this article.