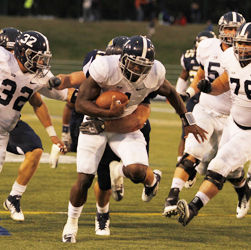 Photo by: Lindsay HartmannJunior quarterback Jerick McKinnon (1) pushes through a hole during an offensive drive to the endzone during the triple overtime thriller against UTC. McKinnon scored three touchdowns throughout the game.

This past weekend, the Eagles of Georgia Southern University utilized both aspects of its offense—the passing and rushing game.

The Eagle’s offense ran up a total of 372 rushing yards on the University of Tennessee at Chattanooga and held it to only 198 yards rushing. At the half, GSU did manage to put up more passing yardage than its opponents 50-28, but UTC managed to finish the game ahead of the Eagles with 118-55 passing yards.

“We are going to go home and enjoy this victory and prepare ourselves for Appalachian State,” head coach Jeff Monken said.

“McKinnon got banged up a little bit, and Ezayi came in and made some plays. I was disappointed with the turnovers, and we have to stop turning the ball over because we gave them some opportunities that they shouldn’t have had,” Monken said.

Along with the rushing yardage, McKinnon was the only offensive player to record passing yardage for the Eagles. The junior completed three of his five passing attempts for 55 total yards. His longest throw was to sophomore wide receiver Zach Walker for 40 yards.

Another offensive aspect of the game that changed the competition up for the Eagles was the fact that different players got a chance to touch the ball.

The only GSU offensive player that did not get any touches this game was sophomore running back Dominique Swope. Swope’s disappearance gave his other teammates a chance to make plays.

“Swope is hurt right now. We didn’t want to disclose that information because we didn’t want the other team to prepare to face us without him. We expect to have him back next week against App. State though,” Monken said.

Robinson and Banks ranked second and third for GSU in rushing yards with Robinson gaining 74 yards and 11 carries and Banks with 69 yards and 18 carries.

“The offensive line makes it easy when they open up holes up front, and they really gave us a lot of opportunities,” Banks said.

Robinson said, “Our offense is based on running the ball, and that’s what our coaches really stress to us. The offensive line played hard tonight, and they stepped up especially on third and shorts.”