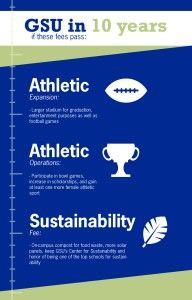 President Brooks Keel will be presenting these fees to the Board of Regents in the near future and will ask for them to be applied to student accounts in the fall of 2013, Jackson said.

“Right now there’s not a specific timeline that has been told to SGA so far,” Christina Belge, SGA executive vice president, said.

GSU will be proposing the approved fees to the University System Board of Regents to review.  If approved, the expansion and green fees will be going into effect fall 2013, according to GSU’s website.

If the Board of Regents approves these fees, the expansion fee and green fee would add $35 onto the student account.  With the FBS fee, students will be paying an additional $110 in the coming years.

“I’m not sure how long the Board of Regents takes to get something approved, but the goal is to get it done throughout this year so the fees can be assessed in fall 2013,” SGA President Dominique Quarles said.

The green fee is expected to have a large impact on students because it will give the opportunity to educate students about sustainability and make them more productive citizens, Jackson said.

“First we’ll form two committees.  One will be the physical project committee and another committee will be more academic,” Belge said.

The physical project committee will work on projects around campus, like solar panels and low flow showerheads in dorm rooms.  The academic committee will be focused on educating students about the importance of sustainability, Belge said.

The green fee will be divided into four sections, each one covering a different area of sustainability.

One part will cover sustainable efforts on campus, like retrofitting buildings and re-lamping.

The second part will be promotional, which will aid in putting up posters and other announcements promoting a green lifestyle.

A third part will focus on curriculum and environmental education.

Lastly, a fourth part of the fee will be used to hire personnel for the Center for Sustainability, which is currently being run by one professor, volunteers and unpaid interns, Belge said.

“It’s good to see that students care about the Earth and the environment,” Garrett Green, SGA vice president of Auxiliary Affairs, said.

The expansion fee will allow students and parents to have more breathing room, both at graduation and football games, Quarles said.

“We’re above and beyond capacity for graduation and football games, so I feel like it will allow students some personal space,” Quarles said.  “Some people don’t come to games because they know if they don’t get there at a certain time, they have to get on the grass, and I feel like it affects our attendance.”

According to the GSU website, the expansion fee will only be part of the total student fees until the cost of construction is completely paid for.

Previous discussion by a professor about the stadium expansion beginning in January 2013 is a rumor, Belge said.

GSU is unsure of when exactly the FBS fee will be applied to the student account because the invitation to join the FBS could come at any time, Jackson said.

“If the fees are approved then we would just work with the business office in Deal Hall to have it added to student fees, all except the FBS fee of course,” Jackson said.

“It will do wonders for our viewers all over who are looking at universities.  It would put Georgia Southern on the forefront and put us at national recognition,” Quarles said.

The FBS fee will only be added to the student fees if the University receives and accepts and invitation from the FBS, Quarles said.

There are currently no plans to charge students for game tickets during regular season play, according to the GSU’s website.

“If these fees are approved, I think the impact on Georgia Southern as a whole and our future is quite great.” Jackson said.

Students have mixed responses on the results of the fees.

“I think the school should focus more on education, but voting ‘no’ wouldn’t have put the money towards education,” Grainne Hutton, sophomore international affairs and French major, said.

“I’d rather be a powerhouse in our division than move up,” Kathryn Beasley, sophomore psychology major, said.

Cliff Padgett, sophomore mechanical engineering major and SGA senator for the College of Engineering and Information Technology, said, “I’m excited for what they will bring to the university. We’ll get more money through donations from people who are into athletics. The green fee is great because we’ll become cleaner and be well known as an environmentally friendly school.”

Dr. Lissa Leege, Biology professor and director of the Center for Sustainability, could not be reached for comment.

President Brooks Keel could not be reached for comment.