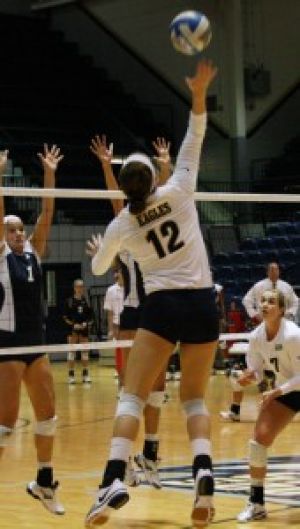 Georgia Southern University senior outside hitter Meredith Paskert was chosen as the Southern Conference Volleyball Offensive Player of the Week for week eight.

In a 3-0 weekend for GSU, Paskert hit .362 and averaged four kills per set, with 44 total kills. She reached double-figure kills in all three matches of the week and added 13 digs and three blocks.

Paskert currently leads the team in kills with 275 this season and an average of 3.27 per set.  She went over 500 kills in her Eagles career after posting 12 against University of North Carolina at Greensboro on Saturday.

She is also tied as the leading server for the team with freshman libero Alexandra Beecher with 24 service aces this season. Paskert added six service aces last week, including four in a 3-0 win at Davidson on Monday.

Paskert is originally from Berksville, Ohio and transferred to GSU from Kent State University in Kent Ohio her junior year. In her junior year she was ranked second on the team with 250 kills and added 32 blocks and 95 digs while posting double figure kills in 12 matches.