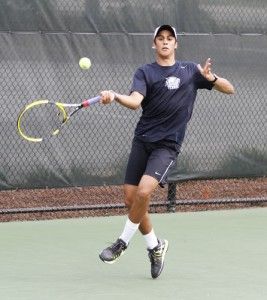 “We’re excited to compete again,” head coach Nick Zieziula said before the tournament started on Thursday. “Our guys got in a lot of match play at home, and we learned a lot from those outings. Qualifying will be tough tomorrow, but the four guys we’ve got going for us are going to do what it takes to fill the draw of 64 with a lot of Georgia Southern blue.”

One of the issues over the weekend was the Eagles’ inability to finish out big matches.

Overall Zieziula was happy with the performances by his players and expects to see great improvements come January.

“I think we have shown a lot of progress from where we were at this point last year,” Zieziula said. “Last year at this tournament we weren’t very competitive. We didn’t put too many Ws up.”

The results show that after winning the first set, Webb fell to Senior Jordan Kelly-Houston from Florida State University 3-6, 6-2, 6-2.

Other than Webb and Verdam, sophomore Andrew Dromsky was the only other Eagle to qualify for the main singles draw.

“This year we got Andrew Dromsky to qualify, which was a big result,” Zieziula said. “He dropped two games and two matches for qualifying in this tournament, which is huge.”

After qualifying for the first round of the main singles draw, Dromsky fell to University of Georgia’s sophomore Eric Diaz 6-3, 6-2.

“Our performance in the main draw was a little disappointing,” Zieziula said. “We competed really well. We had one of the seeds from Florida State down a set and that’s kind of been the theme of the weekend.”

The doubles main draw also caused problems for the Eagles, as all three teams lost their initial matches.

In the round of 64, Verdam and senior Alex Doherty represented the Eagles. Kennesaw State University’s freshman Tobi Menhofer and sophomore Louis Theodor 8-5 defeated them.

The Eagles were represented in the round of 32 by two teams.

The second team was made up of Webb and Dromsky. They faced off against USF’s Acuna Gerard and sophomore business major Oliver Pramming. Acuna Gerard/Pramming defeated Webb/Dromsky 9-7.

The Eagles are about to enter its off-season training in November. They will train for two months before starting up again in January.

“When we come back in January, we will have two weeks of practice, and then we will start up the main season of competitions and dual matches with other schools,” Zieziula said. “If we keep the bitter tastes of these disappointing losses fresh on our minds, that will keep our motivation high in the off season training. If we can do that, I have no doubt we will be successful this spring.”

The Eagles travel to The Citadel this weekend for the last tournament of their fall season, The Citadel Invitational. The tournament is set to last Friday through Sunday.