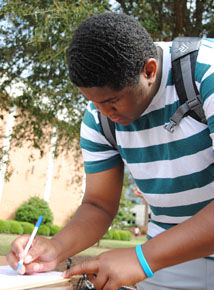 Photo by: Lindsay HartmannFreshman history major Greg Godfrey registers to vote in Statesboro for the presidential election in November. The last day to register is Oct. 9.

Students registered to vote in Bulloch County will be able to cast their vote early, from Oct. 23 to Oct. 25, in the Russell Union ballroom because of a new early voting station.

The Federal Department of Justice approved the voting station last month, allowing Georgia Southern University students to vote between Oct. 23 and Oct. 25 instead of waiting until Nov. 6.

“To my knowledge, it is the first early voting station on a college campus in the state of Georgia,” Aron Randall, senior second vice chair of the College Republicans and political science major, said.

“This is the first time we’ve had early voting, and it is a historic thing. It will simplify things greatly for faculty and for students,” Wendy Denton, assistant director of Service Learning for the Office of Student Leadership and Civic Engagement, said.

The early voting station on campus has been in the works for two years, Randall said.

Randall and Fritz Chapin, member of College Republicans, made progress late last year when they attended a Bulloch County council meeting to explain their position.

“We showed up at the county meeting and explained our position. Later, we had a meeting with them to discuss it,” Randall said.

“This wouldn’t have happened without Bill Herring, the treasurer of the Democratic

Party of Bulloch County. He helped organize the meeting that led to the voting station.

The college republicans had a part too, and they deserve credit. A lot of organizations,

Only students who register by Oct. 9 will be eligible to vote in the presidential election, according to a press release written by Denton.

“It’s important to every student, no more or less than the average citizen. As citizens, students should participate in our democracy,” Denton said.

Everyone needs to be registered by Oct. 9 because it takes time to process the registrations, Denton said.

One forum remains in the series called “One Week, One Vote,” which aims to educate students about the importance of voting. There will be voter registration at the event tonight, Oct. 4 at 7 p.m., in the Russell Union Theatre.

According to the press release, anyone who wishes to register, but who is not available to do so during the campus registration events, can visit the Bulloch County Courthouse during open hours to register.