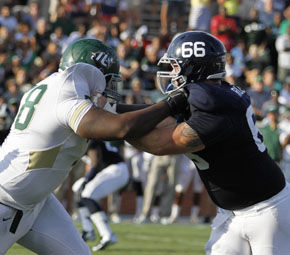 Gametime is at 6 p.m. on Saturday when the U.S. Army parachute team, the Golden Knights, will descend upon Allen E. Paulson Stadium with hopes to fire up the crowd of Eagle fans for Military Appreciation Day.

Eagle fans can also look to see if senior defensive tackle Brent Russell will tie or break the GSU career sacks record. With 23 sacks, he’s currently one sack away from tying Edward Thomas, who played for the Eagles from 1993-1996.

Last week, he recorded .5 sacks. Fans can hope he breaks the record in Statesboro before the Eagles head on a two-game road trip.

The Terriers are looking good this year. They are the only undefeated team in the Southern Conference with a 3-0 record. Overall on the year, WC is 5-0.

WC has yet to play a team with a winning record in the SoCon, and the rest of their season will determine whether or not they stay in first place. The Terriers have yet to play against GSU, Samford University and Appalachian State University — teams that are also fighting for first place.

With a win against the Terriers, the Eagles could move into first place in the SoCon because they would own the tiebreaker against all of the one-loss teams.

This year marks the first year that WC has gone 5-0 since 1991, thanks in large part to a close 20-17 victory over Furman last week.

Senior runningback Eric Breitenstein has been the focus of every defensive coordinator the Terriers have faced this season. Through five games, he is has still managed to impose his will on the field.

Breitenstein has rushed for 893 yards off of 93 carries, averaging 9.6 yards per carry and scoring nine touchdowns. He’s currently ranked first in the SoCon with 178.6 rushing yards per game.

As a comparison between WC and GSU so far this season, the Terriers are looking similar to the Eagles

Led by head coach Mike Ayers, the Terriers average 449 rushing yards per game. GSU is averaging 437 per game. WC does throw the ball more than the Eagles and has six passing touchdowns as opposed to two GSU touchdowns.

GSU is coming into the game feeling confident, off a 45-13 road win against the Western Carolina University Catamounts, where the Eagles rushed for 614 yards.

The Eagles had three players rush for 100-yards against the Catamounts, and they can only hope that they will be able to play another week of turnover-free football against the Terriers.