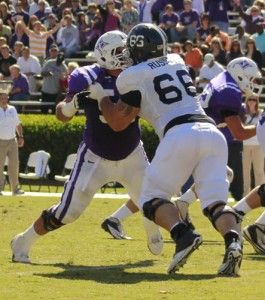 The 2012 season for Georgia Southern University Football brought in many expectations after a cold December defeat in the National semi-final last year against North Dakota State University in the Fargo Dome.

The Eagles were ranked No. 3 in the nation before the season started and projected to win the Southern Conference.

Seven games later and with a record of 6-1 (5-1 SoCon) the Eagles have climbed to No. 2 in the FCS and are atop the standings in their conference.

“Everybody on this team has the mentality that we want to be on top and want to win, nobody likes to lose at all,” junior a-back Johnathan Bryant said.  “We have a very competitive atmosphere here. Everyone wants to compete and get better.”

Going into the season Eagles fan wondered who would be the new signal caller as GSU lost two year starting quarterback Jaybo Shaw to graduation.

“Jerick’s done a good job. He’s thrown the ball a lot better, and hopefully that’s something he can continue to do, and I think Eyazi’s had a good season and has come in time’s we’ve needed him and done a good job,” head coach Jeff Monken said.

Offensively, the Eagles haven’t missed a beat from last year as they are averaging 34.2 points per game. However early on in the season, turnovers were an issue as the Eagles fumbled the ball a total of 14 times with seven of them lost in the first three games.

“At the beginning of the season, turnovers were a major problem. Coaches just stressed it, and our offense knew we had to get it right,” McKinnon said.

“We’re doing pretty well as a defense. We always want to do better than we did the previous week, and there’s always room for improvement in anything that you do,” senior safety Darius Eubanks said.

Midway through the season a constant phrase has been “take one game at a time” and also the respect of their opponents.

GSU’s last half of the schedule includes a date with rivals Appalachian State University at home on Nov. 3, Homecoming game against Howard on Nov. 10 and against the University of Georgia in Athens.