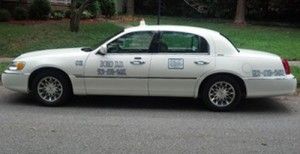 “Students could say to their parents, ‘Hey, I’m in college, you know what I’ll be doing, so put some money on my Eaglexpress so I don’t get in an accident or a DUI’,” LaVan said. “No one else takes it. In the world of business, if you can get something your competitor doesn’t have, then you can get a leg up.”

“GSU students are what we’re targeting. I’m working with the university to take Eaglexpress, but currently we take all major credit cards,” LaVan said.

“Being that the students are our main target, it just gives them another option for payment,” LaVan said.

Boro D.D.’s meter charges include an initial charge, a mileage charge, a wait time charge and a minimum charge.

Currently, Boro D.D. has one Lincoln Town Car, according to its website.

“I’d like to see people driven home who shouldn’t be driving. They’re an asset to the community,” John Riggs, Statesboro city councilman, said.

“With 5,000 new students coming in this year, I thought it would be a good time to get involved,” LaVan said.

For a taxi company to get a business license in Statesboro, the owners must give the name of the proposed company, the number of taxis in the fleet, the area of service and the insurance information of the taxis, according to Statesboro’s code of ordinances.

The city council held an extra session to approve the two new companies.

“The city council members were very helpful. When I went in front of them to be approved, there wasn’t a majority vote, but I was able to get a meeting two days later instead of having to wait two weeks for the next city council meeting,” LaVan said.

“We’ve been open for 39 years,” Jones said. “If they can handle the situations that students need rides in, I take my hat off to them.”

About Town Non-Emergency Shuttle Service could not be reached for comment.