FINAL: Eagles bring in Youyoute to finish out the 45-13 GSU win 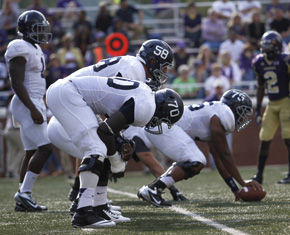 The Georgia Southern University football team defeated Western Carolina University 45-13 this weekend on the road. The Eagles started junior Jerick McKinnon at quarterback instead of sophomore Ezayi Youyoute who is the first string quarterback. GSU went on to get in the end zone to score six every quarter. The Eagle defense are able to hold quarterback Eddie Sullivan and the Catamount offense to only 13 points. The Eagles ended the game with three players rushing over 100 yards including Darreion Robinson, William Banks and Dominique Swope. Freshman James Dean came close to joining the previous three with 95 yards. As quarterback, McKinnon went to the air more often in this game. He attempted four passes and completed two. The two that he completed were good to Kentrellis Showers and Tray Butler. Defensively, the Eagles’ lead tacklers were Brent Russell and Darius Eubanks. Eubanks lead defensively and had seven total tackles with two unassisted and five assisted.

FOURTH QUARTER: Eagles bring in Youyoute and Dobson to finish out the 45-13 GSU win

With a brand new clock set at 15:00, the Eagles looked to continue their drive from the 35 yard line. McKinnon was traded out for Ezayi Youyoute to start the Eagle drive. With Youyoute at quarterback, the Eagles were unsuccessful to convert their drive at the 40 yard line and turned the ball over to the Catamounts.

The Catamounts started their drive with 10:30 to go in the game and on second down, progressed the ball from a pass to the 20 yard line in Eagle territory.  WCU continued their momentum with a ten yard run for the end zone with 9:00 left in the half. WCU also put the extra point through the uprights to make the score GSU 31 WCU 13.

WCU kicked off to J.J. Wilcox who dropped the ball at the two yard line but regained possession and faught to get to the seven yard line. When the Eagles took over, Youyoute converted his offense for two first downs. With 5:15 to go in the game, James Dean ran for a large gain from the 49 to the 14 yard line. On the next play, GSU’s William Banks runs the ball 13 yards into the end zone for another Eagle touchdown. The Eagle’s extra point is good making the score GSU 38 WCU 13 with 5:05 left on the clock.

From the kick off from GSU, the Catamounts are unable to get passed their own 30 yard line on their first drive and are forced to put back to the Eagles with 4:09 to go.

The Eagles start their drive at their own 25 yard line with freshman Matt Dobson at the quarterback position. Dobson progresses his offense to the 48 yard line. With 1:35 to go in the game, freshman running back James Dean is able to break from the crowd of defenders and sprint 32 yards to the end zone for an Eagle touchdown. Hanks converts the extra point for the Eagles making the sore GSU 45 WCU 13 with 1:35 to go in the game.

After the Eagles kick the ball back to the Catamounts, WCU tries to make some extra yards for a last-minute attempt for the end zone but gives up and allows time to expire. The Eagles came out on top at the end of the game 45-13.

THIRD QUARTER: Eagles stay on top in the third

Eagles come back from the locker room looking to finish out the game strong. As the Eagles kick off to their opponents, a penalty is called for the ball going out of bounds and places the ball on their own 35 yard line.

The Catamounts come to the end of their unsuccessful drive and are forced to punt to the Eagles. The ball lands out of bounds and the officials place the GSU 16 yard line.

With 12:00 to go in the third, the Eagles complete a first down run by Robinson gaining 19 yards for the Eagles. From then on, the Eagles are able to complete two more first down conversions to place themselves in the red zone and field goal range.

On fourth and goal and four yards from the end zone, the Eagles decide to go for the field goal attempt. The field goal attempt is blocked by the Catamount defensive line. WCU takes over at their own 20 yard line to begin their drive attempt with 5:47 left in the third.

WCU offense tries many pass attempts but fails to convert on downs and can only get to their own 34 yard line. The Catamounts are forced to punt the ball away to Robinson who returns the ball into WCU territory at the 38 yard line.

To start the Eagle drive, McKinnon hands off to Swope who is able to gain two yards. In the same drive on third down, McKinnon decides to drop back out of the snap and throw 30 yards it to a wipe-open Tray Butler down the left hand side line where he trots in for a GSU touchdown. The extra point kick is good making the score GSU 31 WCU 6 with 3:00 to go in the third.

With the Catamount drive full of sacks and penalties, WCU is forced to punt from their own end zone. WCU’s Clark Sechrest’s kick soars to the GSU 30 where Robinson is there to receive, but gains no yards.

The Eagles will start first and ten at their own 35 yard line as time expired for the third quarter. The score at the end of the third was GSU 31 WCU 6.

SECOND QUARTER: Eagles hold Catamounts to six at the half

The Eagles start the drive at the Catamount 40 yard line and Robinson carries the ball eight yards. On the next down, McKinnon steps back to pass to Kentrellis Showers for another Eagle touchdown with 13:07 to go in the half. The Eagle extra point is good which leaves the score at GSU 21 WCU 6.

GSU’s kicker, Luke Cherry kicks the ball to the Catamounts who return the ball from the ten yard line to the 20 and the drive starts there.

The Catamounts unsuccessful on completing the drive and are forced to punt it back to the Eagles. GSU’s Robinson receives the kick and gets ten yards on the run and ends up at his own 19. The Eagles were forced back ten yards because of an offensive holding penalty.

The Eagles were able climb out of the hole with a run from Swope who puts his team at the 33 yard line. However, the Eagles are unable to continue the drive and are forced to punt the ball for the first time in the game.

After the punt, the Catamounts also had no success at proceeding with their drive and punt right back to the Eagles.

With 6:10 to go in the half, the Eagles start their drive from the punt that takes a long roll to their own five yard line. On first down and a handoff from McKinnon, Swope carries the ball 13 yards for an Eagle first down.

Because of continuous successful downs, the Eagles take a timeout at the Catamount nine yard line with 46 seconds to go in the half. However, the Eagles were unsuccessful at converting the third down and nine and set up to kick a field goal. The field goal attempt from Alex Hanks goes through the uprights putting the Eagle’s score 24 to the Catamounts’ 6.

The punt from the Eagles went out of bounds again placing WCU at their own 35 yard line.

The Catamounts were unsuccessful with continuing the drive and time expires to go into halftime with the scoreboard reading GSU 24 WCU 6.

The Georgia Southern University Eagles lose the coin toss and the Western Carolina Catamounts chose to defer their possession until the second half.

With the ball starting at the Eagles own 31 yard line, the Eagles complete their first drive and progress to the Catamount 38 yard line. From there on first down, Eagle running back Darreion Robinson jukes and sprints 38 yards to the end zone putting six points on the score board with 12:51 to go in the first quarter.

From the kick off to the Catamounts, the Eagles stop their drive and force them to punt.

With 9:22 to go in the first, the Eagles convert a third down with Dominique Swope for four yards placing his team on the Catamount 30 yard line.

Another third down conversion for the Eagles with Swope giving the Eagles a first down on the Catamount 24 yard line.

At 5:00 to go in the first, quarterback Jerick McKinnon hands the ball off to Swope again and puts the Eagles in the redzone for a first down.

In that same drive, the Eagles hand it off to Swope who fights his way into the endzone for another Eagle touchdown with 4:16 to go before the second quarter.

When the Eagles kicked the ball back to WCU, the kick goes out of bounds at the two yard line. The penalty put the ball at the Catamount 35 yard line.

The Catamounts continue their drive down field, converting two first downs. On second down at the Eagles 38 yard line, the Catamounts complete another 1st down putting them in field goal range.

With 43 seconds to go in the first, the WCU quarterback keeps the ball and pushes to the Eagle five yard line.

On the next play, the Catamounts score with 25 seconds left on the clock putting six points on the score board for WCU. However, WCU does not choose to kick the extra point, instead they go for two and fail the conversion. At the conclusion of the first quarter, the score was GSU 14 WCU 6.