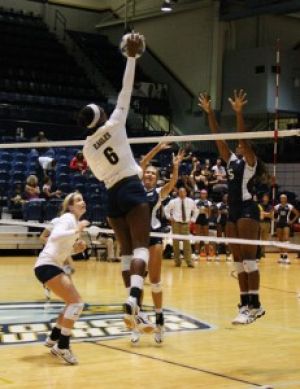 The Georgia Southern University volleyball team (16-6) will be facing Samford University (15-7) on Saturday and The University of Tennessee at Chattanooga (9-14) on Sunday away.

GSU has four straight wins going up against the defending Southern Conference champion and the North Division leader, SU. SU has only lost one match in its past 11 matches, and is 7-1 in conference.

The Eagles’ senior setter Kate Van Dyke does not exceed the Bulldogs setter by much in assists having 907 assists, 11.34 per set. SU’s setter Casey Garvey has 827 assists, 11.18 per set.

GSU will then be playing UTC who has a 7-2 record at home but a 3-5 record in conference. UTC has a 9-14 record overall which is not as strong as the Eagles’ overall record of 16-6.

UTC’s lead players fall below the Eagles’ lead players, especially in the hitting department. The team’s lead senior outside hitter Christina Teter has 199 kills, averaging 2.55 a set. This also can be seen with junior setter Bridget Camacho with 796 assists, averaging 9.59 a set.

In the previous year, GSU played SU and UTC back to back as well. The Eagles fell to the Bulldogs 3-1 but then came back to sweep the Mocs 3-0.

The Eagles do not end its travels here. The team will continue to two more away matches in the next weekend to come to complete a four match away swing.