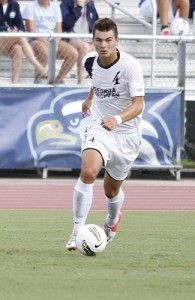 The duo is in a lineage that is unique to Georgia Southern University. Even before Hunter came on campus another Norton was a key figure in GSU Soccer, father Tom Norton coached soccer from 1990-2003 here at GSU.

“I don’t think that there’s any pressure on us just because our dad coached here, any pressure we have comes from ourselves,” Hunter said.

Reed was part of this past year’s freshmen recruiting class. Coming out of high school he was a highly touted recruit with 29 goals and 38 assists on his career and was named all-state his senior year.

He also missed his junior year of high school soccer due to training with the United States U-17 National team.

Hunter, coming out of high school led his club team, the Augusta Arsenal, to three State Cup Semifinals and was a two time Columbia County News Times Player of the Year.

Hunter has started every game since arriving in Statesboro two years ago and is now the captain.

This year both brothers have cracked into the starting line up.

With brothers you can expect competiveness and a drive to be better than one another and these brothers are no different.

“When we were younger, things were really intense between us, both of us didn’t want to lose in any of the sports we played,” Hunter said.

Both brothers are at different points in their playing careers, Hunter, the captain and two years of college experience, and Reed, a young and emerging presence on this team.

An older brother is often thought of as a mentor for the younger one, and that is exactly what Hunter is for Reed. One piece of advice that the older Norton would give to the younger is to stay on top of things.

“The most important thing is to control your life off the field. Academics and social life play a key factor in your performance on the field,” Hunter said.

The Norton duo is here to stay at GSU, and we will have to wait and see what becomes of the two as they continue their careers together here.

By press time, Reed had not responded to the interview request.