Let’s do the Time Warp again 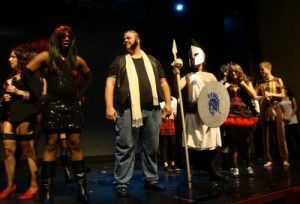 On Thursday and Friday, Georgia Southern University students will have the chance to put on their best costume and do the Time Warp again and again at the Averitt Center for the Arts.

The Independent Arts Movement is producing “The Rocky Horror Picture Show.” The show will start at 7:30 p.m. each night with doors opening at 7 p.m. Tickets for the show will be on sale at the rotunda Monday through Friday next week and cost $5 in advance and $7 at the door while supplies last.

Each year the production tries to either match the original movie or go bigger, Megan Bowen, the show’s costume manager and choreographer, said. She has been a part of this production for four years.

“It’s the one night of the year you can do the craziest things you can think of and you won’t get kicked out,” Kadia Scott, junior public relations major and event coordinator, said.

“Where else can you talk over an entire movie and it be ok?” Scott said.

The show features the original 1975 movie starring Tim Curry playing on a screen while a show cast reenacts it in front of the audience. Audience members are given a prop bag at the beginning of the night so they can play along with the show, Bowen said.

Audience members are encouraged to dress up, whether it is a Rocky Horror themed costume or just a Halloween costume, Bowen said.

“You don’t want to be that one awkward person not dressed up,” Bowen said.

This is the show’s fifth year in production at the Averitt Center, and it is a tradition that the show’s director brought with him from GSU.

“The one at the Averitt is my baby,” Peterson said.

After being a part of the annual GSU for four years, Peterson brought the idea of doing another show to the Averitt Center and has been helping put on the production ever since.

Part of Peterson’s job is to make sure the show has funding each year— a job that was made easier by local business’s donations. Galactic Comics, Pladd Dot Music and Ivory Tower are among those who help keep the production going from year to year, Peterson said.

“The whole reason I wanted to keep doing the show is because I enjoy it so much,” Peterson said.

This year marks Peterson’s ninth year in a row playing the iconic character of Riff Raff on top of his duties as director.

Peterson said, “People will not let me not do Riff Raff.”