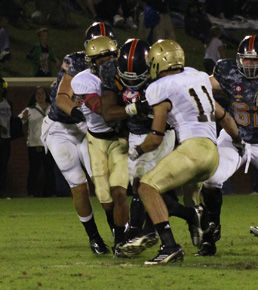 At the beginning of the first quarter, the game was still up for grabs but the Eagles ended up taking the victory 17-9 against Wofford College.

In the first half, both offenses struggled and Wofford was held to two field goals thanks to impressive play by the Eagle defense. The only scoring for the Eagles during the first half came from a field goal and a touchdown at the end of the half.

No points were put up during the third quarter and both offenses continued to to struggle. In the fourth quarter an injury scare, where it appeared Jerick McKinnon may be hurt, inspired B-back Dominique Swope to run hard. He was able to score a 3-yard touchdown and the Eagles went up 17-6 with 8:36 to go in the game. McKinnon did walk off the field on his own power but sophomore quarterback Ezayi Youyoute did replace him. McKinnon would come back into the game.

From there, the Eagles looked to run the clock down and the Eagles needed to convert a huge 3rd and 6 with 2:12 to go in the game. GSU converted it, after a McKinnon run and the Terriers were forced to start burning their timeouts. Wofford used its last timeout on a 3rd and one from the Wofford 46 yard line with 1:21 to go in the game. Swope almost made the first down but was stuffed and on the next snap, 4th and one, Swope was able to convert it and GSU was able to take the knee to end the game. Eagles win 17-9 and move to 5-1 on the season

After starting pretty slow, with an early 6-0 Terrier lead in the beginning of the 2nd quarter, the Eagle offense woke up  in the end of the first half with a rushing touchdown from B-back Dominique Swope to put the Eagles up 10-6 to start the 2nd half.

The offense for the Eagles may have just come alive just long enough to score before the half, because on their first possession of the 2nd half, the Eagles lost 10 yards, instead of gaining anything.

The Wofford offense did start moving the ball a little bit but they continued to struggle on third down, just like the Eagles. Terrier fullback Eric Breitenstein did convert a 4th and one as the Terriers reached 4-down territory but Wofford eventually did kick it and with 4:36 to go in the third, the Eagles would receive the ball and the GSU offense would have enough chance to show some life.

The Eagles couldn’t get a scoring drive going yet again and the score remains at 10-6.

To start the 2nd quarter, the Terriers kicked a field goal that put Wofford up 6-0. Junior quarterback Jerick Mckinnon did try to provide a spark for the GSU offense with a 33-yard run but the Eagles failed to convert the following third down conversion.  Eagle kicker Alex Hanks kicked a 48-yard field goal to bring the Eagles within three for a 6-3 score with 11:52 to go in the first half.

The two offenses continued to battle around the middle of the field. The Eagles got great field position with 2:32 left in the half after a 46-yard punt return by senior A-back Darreion Robinson. The Eagles got the ball on the Wofford 29.

From there, the Eagle offense was either on a mission to score before halftime, or it was finally getting momentum to favor the Eagles. Dominique Swope scored a 2 yard touchdown run and the Eagles were up 10-6 going into halftime.

The beginning of the game between the Wofford Terriers and the Georgia Southern University Eagles was far from a perfect one.

On the second snap of the game, sophomore Eagle B-back Dominique Swope fumbled the ball, on the following possession the Eagles held the Terriers to a third and 6 but the Eagles were called offsides on the field goal. The Terriers then threw to the endzone where a defensive pass interference  gave them a first down on the 2 yard line.

From there, the Eagle defense looked to make-up for the penalties called on them and they managed to hold the Terriers to a field goal with 9:25 left in the first quarter.

The Eagle defense settled down and started playing more disciplined. The Terriers were held to a third and 15 during their second possession, where the Eagles got a big sack thanks to senior defensive tackle Brent Russell and senior linebacker John Stevenson. Russell is now half a sack away from tying the GSU career sack record.

Both offenses struggled a bit but Terrier fullback did break loose for a 65-yard run with 1:25 to go in the first quarter. This gave the ball to the Terriers on the GSU 13-yard line but the Eagle defense again held Wofford to a field goal. By the end of the quarter, the Eagles were down 3-0 and about to kick another to start the second quarter.