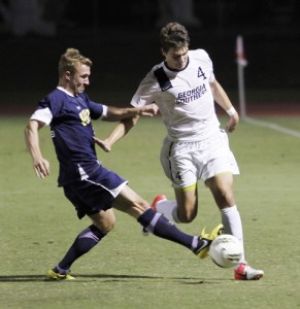 The upset was due in large part to junior midfielder Hunter Norton’s two goals, both of which came in the first half. The UNCG offense was unable get anything past junior goalkeeper Neal Bates, who had a first half shutout.

The stingy Eagle defense held UNCG to just five shots, three of which were on goal attempts. Norton’s header in the 33rd minute sent the Eagles to the locker room with a 2-0-halftime lead.

UNCG came out energized and determined to start the second half and fired five shots, but Bates didn’t seem phased, as he allowed no goals for a whopping 85 minutes. Bates ended his clutch performance with six saves on seven shots.

The Eagle offense kept rolling as they had two players score their first career goals.

Freshman forward Eric Dinka scored in dramatic fashion just before the hour mark with an unassisted strike across his body as he tore through the Spartan defense all the way down to the penalty box.

Sophomore midfielder Rocco Bagley decided to get in on the scoring frenzy 20 minutes later with his first career goal.

A through ball from junior forward Witt Carlisle set Bagley up to take full advantage of the rare opportunity with a six-yard kick that found the back of the net.

The Eagles had not won in 10 games and had not beat UNCG since 2008 with a 1-21 record against the Spartans over their last meetings going into the match.

The Eagles seemed unaware of their less-than-stellar record against the powerhouse as they had a 4-0 lead with just 10 minutes left.

The Spartans would later end the shutout with a corner kick header from sophomore midfielder Preston Ford in the 85th minute. It would seem too little, too late as the final whistle blew, and the Eagles celebrated a 4-1 victory on Eagle Field, snapping their loosing streak of 10 straight losses.

The Eagles dominated on both sides of the ball and played a near flawless game. They beat the Spartans 3-0 in yellow cards, 18-15 in shot attempts, and 10-7 in shots on goal.

After an upcoming Saturday night visit to Wofford College, the Eagles are will be back on Eagle Field Tuesday to face Furman University at 7 p.m.