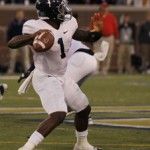 Photo by: Lindsay HartmannJunior quarterback Jerick McKinnon (1) steps back to pass to sophomore receiver Zach Walker during the 39-31 triple-overtime victory over the Mocs.

During one of the most dramatic possessions of the game, the Eagles converted a fourth and one, and a third and 2 in order to score during triple-overtime. According to NCAA rules, teams must go for two after each touchdown starting in triple overtime. The Eagles converted theirs and went up 39-31.

The Mocs fought and faced a 4th and 2 from the 5-yard line. This was the game. Eubanks and Wilcox got the tackle to seal the 39-31 Eagle victory.

Both offenses fail to score, game heads to triple overtime. 31-31

The Mocs received the ball first in the second overtime and the Eagle defense held UTC to a 3rd and 9 from the 24 yard-line. Chattanooga missed a 44-yard field goal against the wind wide-right.

The game was in the hands of the Eagle offense, the least they had to do was kick a field goal but the Mocs forced a fumble and the game went to triple overtime after UTC recovered it.

Mocs score on fourth down for eight yards to force double overtime. 31-31

On the second play of overtime, Darreion Robinson scored from 20 yards out to bring the score to 31-24. The Mocs have one possession from the GSU 25-yard line to match the touchdown, otherwise the Eagles will take the win.

The ballgame came down to a 4th and 5 from the 8 yard line for the Mocs. The Eagle defense looked like they had a sack to finish the game, but at the last second, Huesman completed the touchdown pass and the teams were sent to double overtime.

The Eagles took the first drive of the fourth quarter, down 24-21 after the Mocs came back from a 21-10 deficit from the first half,  and the pressure the Moc defense provided was enough to deflate any hopes for a GSU victory.

As quickly as hope was lost, a new spark of hope appeared after a muffed punt by the Mocs, which gave the ball to the GSU on the Moc 36 yard line that would eventually lead to a mere field goal for the Eagles but a tie game 24-24 with 8:06 to go.

For the rest of game, the two teams battled until eventually the Eagles sustained a drive that would give them a chance to win via a last-second field goal. The kick by Alex Hanks went wide-right and the Eagles would head to overtime for the first time since 2010.

The Eagles started the second half with the ball and McKinnon had come back into the game at quarterback and the Eagles were starting to put a good drive together, until they fumbled.

Chattanooga head coach Russ Huesman, father of the Moc quarterback, started running some tricky plays and airing the football to try to take advantage of some Eagle cornerbacks. The Mocs threatened to score a couple of times with plays to the end-zone but then the Eagle defense hunkered down and a sack by Dion Dubose helped keep the Mocs out of field goal range, leading to a forced punt on 4th and 15.

To end the third, the Mocs and Jacob Huesman scored on a third and four from the 10-yard line and Chattanooga, who had been down by as many as 14-points in the first quarter, took its first lead of the game 24-21.

Offenses slow down, Eagles up 21-10 at halftime

The pace the Eagle offense had set during the first quarter, when they came out to a 14-7 lead, remained constant.

During the first Eagle drive of the 2nd quarter, McKinnon not only converted a 3rd and 7 with a 40-yard pass to Zach Walker, but also scored a rushing touchdown from 19-yards out. This helped put the Eagles up 21-7.

The Chattanooga offense struggled ever since their first touchdown drive and they didn’t even convert a third-down until there was 6:06 left in the first half. From then on, Huesman and the Mocs started picking up bigger chunks of yards.

Eventually, the Eagle defense held the Mocs to a 39-yard field goal to bring the score to 21-10.

With the final drive of the half, the Eagles pushed the ball down the field with Ezayi Youyoute taking the snaps, who replaced McKinnon after he limped off the field. The Eagles tried to kick a field goal to close the half but freshman kicker Alex Hanks missed the kick wide-left.

A defensive game was expected between the University of Tennessee at Chattanooga and Georgia Southern University football teams, but the players decided to write their own script.

The Eagles started the day moving the ball efficiently down the field with the chilly wind at their backs.

During the first GSU possession of the game, The Eagles converted two 3rd-and longs. On the 2nd third-down, A-back Darreion Robinson reversed the field for a 29-yard touchdown and the Eagles went up 7-0 early.

During the ensuing kickoff to the Moc’s, Marquis Green fumbled the kickoff recovery, giving the Eagles a short field on the 29-yard line.

McKinnon made the best of the mistake by the Mocs, avoided a tackle, spun around a defender and dove into the endzone to give the Eagles an early 14-0 lead.

The Moc’s responded and went on a tear down the field, freshman quarterback Jacob Huesman led the Chattanooga offense 75 yards down the field in only 1:54 for a touchdown.