Timely conversions the key to victory for GSU 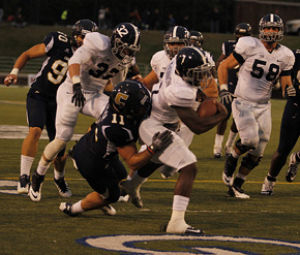 Georgia Southern University got all that it asked for and more against University of Tennessee Chattanooga. In a game like this every down counts and none was more apparent than the conversions of third and fourth down.

In the first half the Eagles 4 for 6 on third down and capitalized with a 29-yard touchdown run courtesy of Darreion Robinson. Also in the first half a key conversion was a 40-yard pass from Jerick McKinnon to Zach Walker.

However in the second half GSU struggled and was held to 1-7 on third down. This dry spell attributed to UTC comeback for eleven down at half.

In the three periods of overtime the Eagles managed to return to being successful in key third down situations going 2-3 and notably having McKinnon score from 1 yard out in the third and final overtime.

UTC was held to 3-12 on the day on third downs. The major play that came from the Mocs was on a 3rd and 4; quarterback Jacob Huesman scrambled his way 10 yards to find the end zone near the end of the 3rd quarter.

Numbers don’t lie and one of the reasons GSU won the game was because they were efficient when it mattered most.