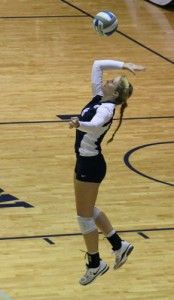 Beecher tallied 23 digs and six assist in GSU’s 3-1 win at Fridays match against the College of Charleston, which pushed the Eagles into the first place spot in the South Division.

The freshman then added 21 digs, three assists and a service ace in GSU’s 3-0 win at The Citadel on Saturday.

Beecher averages 4.64 digs per set and has tallied 459 season digs. On top of that, Beecher has also notched 27 season service aces.

This is the fifth SoCon weekly award for the Eagles this season. Senior outside Meredith Paskert received Offensive Player of the week (week eight) and senior setter Kate Van Dyke was named Student-Athlete of the week (Sept. 26).

Beecher who is originally from Orlando, Fla. was named to the All-Central Florida Top Team in high school and was voted best libero in Central Florida.