Reynard Ellis is transitioning to Sun Belt play with success 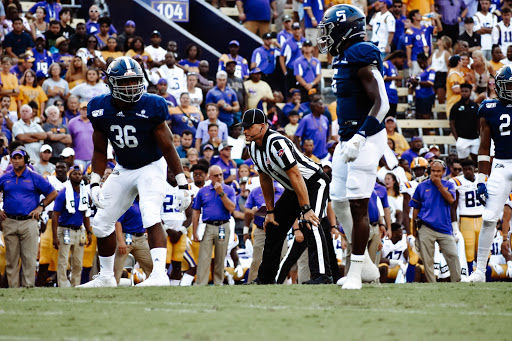 Head Coach Chad Lunsford has said that Ellis (36) is "fitting in" well with the team.

A big name on the defense this year for the Georgia Southern football team has been redshirt-sophomore linebacker Reynard Ellis, who transferred in from Furman and is fitting in well with the team in his first year of eligibility.

Even though he transferred last year, per NCAA transfer rules the Alabama native had to sit out his first season as an Eagle. Ellis transferred in from Furman, where he played in 12 games, starting 10 as a true freshman and totaled 92 tackles on the season.

While finding success as a Paladin, Ellis was not satisfied and was looking for something else for his college career.

“I wanted to go to a different environment,” Ellis said. “Coach Sloan had talked to Coach Cunningham about me coming to visit. I just liked what I had seen, like the brotherhood up here. There’s just a lot of stuff I liked, so I came up here. Coach Lunsford gave me a chance, and I appreciate it.”

While being successful as Furman, it’s definitely a step up and a change of speed when it comes to the level of play here at Georgia Southern, but Ellis has handled the change with grace. Having a season as a redshirt to work on that change was helpful for the linebacker as well.

“I just focused on getting better,” Ellis said regarding his redshirt season. “Learning the playbook. Just trying to be stronger, faster. Just coming back. I just wanted to make sure that when I came back, I was going to be ready to play. I wanted to use my year to get better.”

So far, it was well worth it as Ellis has had an immense impact on the Eagle defense this season, totalling 27 tackles on the season as well as a sack, resulting in a loss of nine yards. He also blocked a field goal against Minnesota, resulting in a scored touchdown for GS.

Ellis has also served as a good fit for the Eagles, getting along well with his teammates while working towards his goals of a conference championship and a bowl win.