Swope runs away with SoCon honor 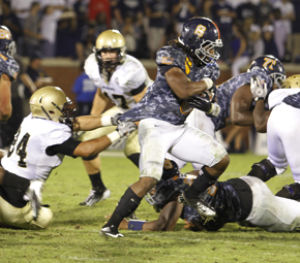 The Southern Conference gave recognition to the man who ran for two touchdowns against Wofford College on Saturday.

The man recognized as SoCon Offensive Player of the Week, sophomore b-back Dominique Swope, ran for 137 yards off 25 carries against the Terriers. He also scored the only two touchdowns in the game.

This type of performance has been nothing new to Swope. He has been on a tear since the beginning of the season, and so far, he’s averaging 110.3 rushing yards per game.

Last week’s game was Swope’s eighth time rushing for more than 100 yards in a game during his career. He has also scored a touchdown in seven straight games.

Through six games this season, Swope has amassed 662 rushing yards off 116 carries. He has scored 10 touchdowns, three more than the seven he scored last year in 13 games.

Swope gives a lot of credit for his success to the offensive line.

“They’re working hard. They work hard every season. I give a lot of credit to the line; they’re the reason why I have all the holes that I’m allowed to run through. They do their best every game,” Swope said.

Even when Swope is not given the ball, he still has an impact on the game by blocking for other backs that are hungry for yardage.

“Everybody has assignments, it’s either to cut somebody or get somebody leverage or pass blocking,” Swope said.

The reigning SoCon Freshman of the Year did not let his early career success get to him, and it has not affected how he approached this season.

“It’s just another season. Everybody was hyped to start the season, and now we’re just trying to get through the stretch to hopefully win the SoCon again. That was a great team last year, and we’re just hungry for another one,” Swope said.

Head coach Jeff Monken and his staff provides a scheme for the Eagles that, along with film study, gives Swope confidence in his team.

“We trust the scheme the coach provides us with, and we look at film. As long as we play our football we’ll be alright,” Swope said.

Swope and the Eagles have five games left in the season, and Swope is confident that the team will do well enough to reach their goal of winning another SoCon title.

Swope said, “I have plenty of confidence in my team. We’ve got great coaching, and there couldn’t be much else to ask for.”