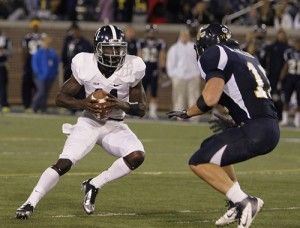 Photo by: Lindsay HartmannSophomore quarterback Ezayi Youyoute (11) attempts to juke around UTC defender in hopes to make a big plan.

The will to win was so strong during Saturday’s 39-31 game between the University of Tennessee at Chattanooga and Georgia Southern University that it took three overtimes before the Mocs could be overcome.

During the first overtime both teams were evenly matched, and after senior Darreion Robinson scored from 20 yards out, the Mocs responded and sent the game into double-overtime.

UTC started with the ball first in the second OT but the Eagle defense held the Mocs, who were running against the cold wind in Chattanooga to a field goal attempt.

After the Mocs missed the field goal, GSU merely needed to kick a field goal to win. On the first snap, the Eagles fumbled and the game would reach its first triple-overtime since 2010.

After converting a fourth and two on the GSU five yard line, the Eagles and junior quarterback Jerick McKinnon got the go-ahead score and put the pressure on the Mocs offense to respond.

UTC had a chance to tie the game but senior safeties JJ Wilcox and Darius Euebanks stuffed freshman Mocs quarterback Jacob Huesman on a fourth and two from the GSU five-yard line.

“Our defense made a great stop on the last fourth down to win the game. I just love those guys a lot. I’m glad to be a part of this time,” McKinnon said.

With the Eagles up 21-10 at halftime, the game looked like it was GSU’s to win, but the Mocs came out of the locker room at halftime strong and on a mission to defend its field, scoring 14 unanswered points during the third quarter while keeping the GSU offense out of the endzone.

During the last possession of the third quarter, the Mocs went ahead 24-21, knocking the wind out of a GSU crowd that braved the chilly Chattanooga weather to cheer for the Eagles.

Halfway through the fourth quarter, the Eagles finally got in field goal range and freshman kicker Alex Hanks tied the game with a 24-yard field goal.

In dramatic fashion, McKinnon and the GSU offense marched down the field during the last possession of the game to set up a 59-yard field goal. The kick had the distance but sailed wide right to send the game into overtime.

McKinnon had a career-high three rushing touchdowns to go with his 141 rushing yards off 28 carries. His most important touchdown came in the third overtime on a third and goal that put the Eagles up 37-31.

Huesman was responsible for three of the four UTC touchdowns during the game, contributing 272 of the 316 yards gained by the Mocs on the day, a sure sign that he will wreak havoc in the SoCon for three more years.

With the win, playoff hopes were kept alive, and a win next week against Appalachian State University on Nov. 3 will allow the Eagles to reach the postseason for the third time in as many years.