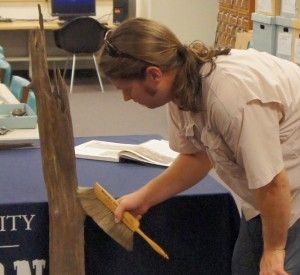 Photo by: Chad KenneyMatt Newberry prepares a wooden post from Camp Lawton for conservation. This post was part of the stockade wall and is 150 years old.

Students and researchers found several artifacts that were discovered during the week of filming and research at Camp Lawton for the Public Broadcasting Service documentary that researchers believe date back to the Civil War.

Georgia Southern University’s anthropology students were able to contribute to the excavation.

“It was a challenging yet rewarding experience. Archeology is typically done slowly, so when it’s sped up its uncomfortable,” Matthew Newberry, logistics coordinator for Camp Lawton said. “We did more archeology in three days than we usually do in a year.”

Many discoveries were unearthed, and more potential excavation sites were established, Peggy Hargis, professor and department head of sociology and anthropology, said.

In the first week of October, GSU students researched the historic Civil War prisoner of war camp while PBS filmed during the latter part of the week starting on Wednesday and continuing until Friday.

During the week of filming, archeologists found what they believed to be part of an oven, a few sleeping barracks and sections of trenches, Hargis said.

The crews found a log in the creek that runs through the state park and is a part of the Camp Lawton’s stockade. Using the dendrochronology techniques brought by the PBS team, archeologists found that the tree was a yellow pine linked to the camp’s history.

PBS also brought ground-penetrating radars to help locate the main entrance the prisoners of war would have crossed to enter the camp over 150 years ago, Greene said.

The radars located the entrance under the parking lot, so a 10 by 10 square foot area of asphalt was stripped to follow their lead.

The team did not find the main entrance but they were able to find two walls, Greene said.

“We unearthed two long sections of the south and west wall. This was a significant look into where the main wall really was,” Greene said.

Greene said, “Now we are moving to processing this information. We have to complete lab work, paper work and take inventory of all the artifacts we discovered.”