Eagles rise to No. 1 second time this season 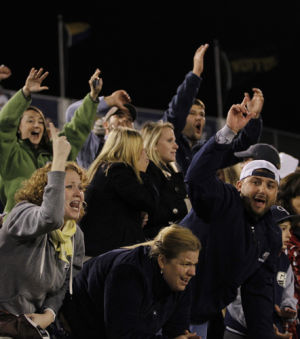 Most recently, Georgia Southern University has risen to prominence in the Football Championship Subdivision Coaches Poll after a huge 39-31 triple-overtime victory against University of Tennessee at Chattanooga on Saturday.

With a 7-1 record on the season, the Eagles received 17 first-place votes to ascend the top of the polls from the second ranking they had last week.

GSU received 635 points while North Dakota State University rose one spot to the number two ranking with 619 points, according to a Southern Conference press release.

This is the first time this year the coaches in the FCS have recognized GSU as the best team in the league.

Wofford College is the only other SoCon team that was named within the top 10 of the coach’s poll.

Throughout interviews conducted with players over this season, head coach Jeff Monken and the players have preached that the rankings don’t matter to them. Their focus is to play one game at a time and win a SoCon championship.

The first time the Eagles rose to the number one spot was when the Eagles reached the top of the SoCon standings, three weeks ago after the victory against WC.

Going into that game, WC was ranked third and GSU was ranked seventh in the FCS Coaches Poll.

In the “The Sports Network” rankings, conducted by journalists, GSU remains behind North Dakota State at the No. 2 spot with 3,928 points.