Eagle defense holds it down 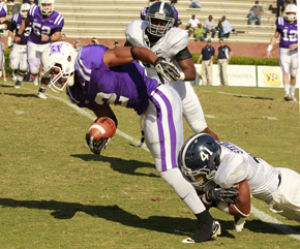 The Georgia Southern University defense came onto Furman University turf and was able to perform effectively, holding the Furman offense to 17 points.

The defense was able to restrain the Paladin rushing yardage, force fumbles and return turnovers inside the red-zone.

“I thought the guys played better in the second half. I told them not to expect Furman to let us run all over them just because we beat them last year,” head coach Jeff Monken said.

The Eagle defense held Furman starting quarterback Reese Hannon and his offense to 140 total rushing yards. The Paladin’s lead rusher was starting running back Jerodis Williams who had 17 carries for 98 total yards, while Hannon had nine of his own.

“They are a great team who has Jerodis Williams, one of the best running backs in the nation,” senior defensive tackle Brent Russell.

The Eagle that produced the most tackles on the Eagle defense was senior linebacker John Stevenson. Stevenson racked up 12 total tackles against the Paladin offense, seven of them by himself and five assisted.

GSU’s defense was also able to force three fumbles from the Furman offense, one of which was recovered by the Eagles and returned inside the red-zone. Senior defensive end Dion DuBose recovered the fumble by Hannon and returned it 44 yards to the Furman five yard line.

By halftime, the Paladins had run the score up close to the Eagles’ lead, which worried Monken and his staff.

“Sure it concerns me because anytime someone can sustain a drive and take it up the field like that, that’s worrisome, Monken said.

After the halftime break was over, GSU came out the locker room with a kicked up attitude.

“At half time, Coach Monken really sparked us, 100 percent effort was our spark, Russell said.

In the third quarter, a large defensive effort came from an unsuspected Eagle player. Junior kicker Luke Cherry was able to chase down Williams from a punt return he was able to break away with. Cherry was the Eagle’s last hope at saving the return from going in the endzone, and he did.

“I’m really proud of Luke, he’s the safety for the other side of the field on kickoffs and he did a good job bringing down that tough player, Monken said.