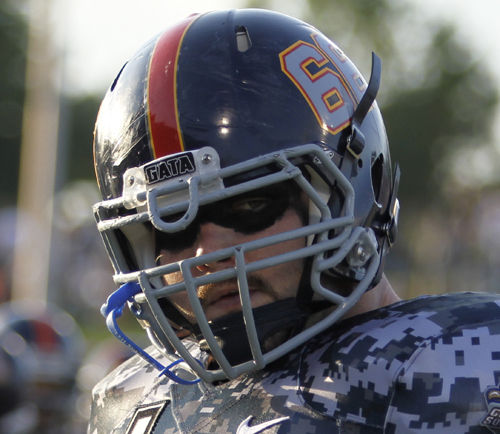 Photo by: Lindsay HartmannSenior defensive tackle Brent Russell is half a sack away from meeting the GSU career sack record.

Russell has 23.5 sacks and is half a sack away from tying the GSU career sacks record held by Edward Thomas, who played from 1993-1996. Russell was not too focused on the record though.

“It’d be something that’s great to have. I’m not really focused on it. I didn’t even know I was close to it,” Russell said.

So far in his career, Russell has 52 tackles that resulted in a loss of yardage, 23.5 sacks, four blocked kicks, one interception, three forced fumbles and one fumble recovery. His favorite stat to get is a sack, he said.

“Sacks are every d-lineman’s goal. As a defense though, we like to stop the run so tackles for loss are important too,” Russell said.

During the home games in Statesboro, fans can often see Russell waving his arms up on third down. Usually, the crowd responds by getting as loud as a stadium can with 100,000 people in it.

“It feels good. (The fans) change the game so much. Just having them respond helps us so much, it really changes the game,” Russell said.

The biggest Brent Russell fan of all is his son Nolan, who turns six on Saturday when GSU travels to Furman to play their third road game of the season.

“He comes almost every game, and he’s always out there yelling. It’s great,” Russell said.

According to the numbers, Russell has been a better pass rusher than anyone GSU has had within the last 15 years. He doesn’t have any special tricks or advanced techniques, he said.

“We’re just getting after the ball and swarming as a defense. It just happens,” Russell said.

Football has been Russell’s life since he was 12 years old, when he and his twin brother often played in the backyard, he said.

Russell’s favorite football memory is certainly playing with his brother, who always pushed him to be the best that he could be, he said.

During their career at Madison County High School, the Russell brothers led the school to two consecutive state playoffs for the first time in 20 years.

Before coming to GSU and striking fear into opposing quarterbacks, Russell also had a wrestling career. After going 56-1 in his senior year, he won the Class AAAA Heavyweight wrestling title.

Russell’s career here at GSU started off rough due to a knee injury in the season opener his freshman year against the University of Georgia.  To have the chance to break the career sack’s record is even more impressive considering he has only played three and a half years.

“Any football player likes to think they’re invincible, especially out on the field,” Russell said.

The injury ultimately helped him be a stronger player, he said.

“Not being around the guys, it gets you down. Coming back from that I think it gave me a stronger mental toughness, just to work through it and get back out there with the guys,” Russell said.

Russell’s favorite memory as an Eagle was when he and his teammates beat Appalachian State University in 2010. ASU came in ranked number one and jumped to an early 14-point lead. The Eagles battled back and won in overtime.

“It was a great rush, great feeling,” Russell said.

Head football coach Jeff Monken has been able to rely on Russell to anchor the defensive line ever since he came to GSU three years ago, Monken said.

“Brent is an outstanding player, and he makes our entire football team better because of the disruption he causes on defense. Beyond that, he does a terrific job in leadership. He’s one of the most competitive people I’ve ever been around,” Monken said. “That makes such a difference with the way he plays with passion and effort. He’s great for our team and great for our football program.”

When Monken came to GSU, he changed the policy so that all of the football players live within the same dorm. Russell believes that had a positive effect on the team as a whole.

“It really brought us close, living together. I think you can see a change when we take the field as far as mental toughness, and we really trust each other,” Russell said.

In his free time, Brent likes to hang out with the guys from the team to play Call of Duty and watch movies.

When he graduates in December, Russell will look to work out for the NFL Combine assuming he stays healthy. If that does not work out then Brent will work for his father in Athens, Ga.