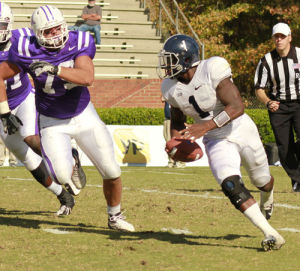 Against the Furman University Paladins this past weekend, the Eagle offense opened up their options and made the most of both of their quarterbacks, which aided in their victory.

Junior quarterback Jerick McKinnon started off the game behind the offense but was unable to get the ball moving and was swapped with sophomore quarterback Ezayi Youyoute with 1:50 left in the first half.

Youyoute hit the field aggressively by rushing 13 yards on his first play and completed two passes in a row, one to junior back Johnathan Bryant and the other to senior wide receiver Patrick Barker.

“Ezayi did a great job throwing the ball and moving the offense. With the play action, the offensive line gave me great blockage and opened up holes for us,” McKinnon said.

“We don’t throw as much, but when we do, you know it’s going to be a big play,” Bryant said.

To end the half, Youyoute topped the rushing charts for the Eagles with four carries for 26 yards. He also out-passed McKinnon in a shorter amount of time with three of four completions for a total of 46 yards. McKinnon though, recorded the longest pass completion for 41 yards. The pass was caught by junior a-back Johnathan Bryant.

Even with Youyoute’s aggressive nature in the second quarter, the only fumble that GSU recorded was from one of his snaps. The Paladins recovered the ball and took over with 40 seconds left in the half.

“You kind of hang your head a little bit, but you know you have to get back out there on that next drive. I think our team is getting there, and we have adversities, but we know there’s going to be another play. We are getting that now, and we have to be comfortable with each other in order to make a play,” Bryant said.

After the half time break, McKinnon opened, and Youyoute did not see the field again for the rest of the game.

In the third quarter, McKinnon worked his way up to the top of his team’s rushing category with nine carries for 66 yards. The junior quarterback had doubled the yardage of both of his running backs, Bryant and sophomore Dominique Swope who recorded 33 yards each.

By the fourth, McKinnon completed three of five pass attempts for 119 total yards and one touchdown for the Eagles. He also landed in third place on GSU’s rushing charts with 16 carries for 88 yards.

“In the second half we just executed and didn’t miss assignments and being on top of our P’s and Q’s,” McKinnon said.

McKinnon said, “Anytime you have a chance to make a play, whether its running the ball, it all feels great, and our offensive line did a great job giving me time to get the ball out to one of our best receivers.”