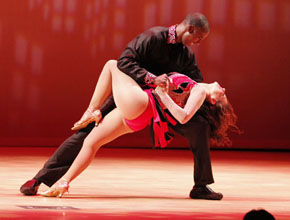 Photo by: Lindsay HartmannCoach Charlton Young and partner Melanie Lewis won Judges Choice Award for Best Overall Performance during the Dancing With The Stars Statesboro event held at the PAC on Oct. 4.

Dancing with the Statesboro Stars fundraiser held on Thursday raised over $25,000 to aid domestic abuse victims at Safe Haven of Statesboro after a budget cut of $85,000.

Charleston Young, Georgia Southern University’s men’s basketball head coach, and Melanie Lewis, professional dance instructor and owner of N-Shape Fitness, performed Usher dance moves. Audience members cheered them on and Young’s wife even yelled out amongst everyone, “go baby.” Young and Lewis came out on stage with a black hoodies over their heads and entertained the audience with high-energy dance moves that were in sequence with one another.

“Melanie was like give me Usher, give me Usher, but I’m not Usher,” Young said on stage after his winning performance. “Going up there and dancing was very nerve-wracking. This was the ultimate community service.”

Young and his partner Lewis won the Judges Choice Award for best overall performance with their hip-hop dance moves and crowd appeal.

The Community Choice Award was presented to Lori Grice, photographer, and Michael Singleton, firefighter and medic, for the most votes from the community as each vote donated $1 to the Safe Haven foundation.

Grice and Singleton re-enacted Dirty Dancing’s “I’m Having the Time of My Life” as they danced on the stage and down to where the audience sat. Swing Cats were in the audience and danced along with the performers to encourage audience members to dance as well.

Beth Monken performed the cha-cha in a flashy turquoise dress on stage with Gene Tyre, a professional ballroom instructor and founder for Round Dancing.

“(Jeff Monken) thought it was great. He grew up watching his parents dance, shag dance. Maybe he’ll get up there next year and do it, but I doubt that could happen during football season,” Beth Monken said.

Thompson served as the professional with her background in the performing arts and danced to a theatrical performance with her partner John Groover, academic dean at Ogeechee Technical College.

Their dance was an office setting with a desk and chair on stage. Each was dressed in business attire while Thompson teasingly danced around the chair Groover sat in during the performance. The only time Groover moved was when Thompson would yank at his tie and drag him across stage while still seated.

“I’ve been sitting here waiting for months for this. I’ve practiced more than anyone else on this stage,” Groover said.