GSU rises to top of SoCon 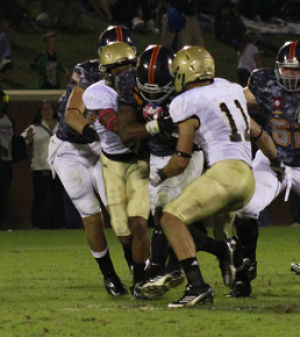 Georgia Southern University beat Wofford College 17-9 and emerged as No. 1 in the Southern Conference after the top two ranked teams met for battle Saturday.

The Eagle defense helped keep a potent WC offense at bay while GSU managed to run the ball well enough to come out on top.

Sophomore b-back Dominique Swope provided a spark for an Eagle offense that struggled to remain consistent during the day. He recorded 139 yards on 24 carries, and he scored two touchdowns. As a result, he was named SoCon’s Offensive Player of the Week.

During the beginning of the game, it looked like it would be a rough day for GSU. Swope fumbled the ball and gave the Wofford College Terriers a short field to work with.

The Eagle defense played hard and held the Terrier offense, led by senior fullback Eric Breitenstein, to a field goal to set the tone for the game.

Early in the second quarter, WC was held to another field goal and the Eagles were down 6-0. This is a good sign for the Eagle defense, which held the Terriers out of the endzone and just four of 15 on third down.

After the second WC field goal by kicker Christian Reed, the Eagle offense started to wear down a Terrier defense, which was also playing well. The Eagles were held to three of 10 on third down and much of the day was spent between the 20s for both teams.

With 11:52 left in the second quarter, GSU got close enough for freshman kicker Alex Hanks, who kicked a 48-yard field goal, to bring the Eagles within three points of the Terriers.

As halftime drew near, it was important for the Eagles to score a touchdown going into the half because they would be kicking to Wofford to start the second half.

GSU senior punt returner Darreion Robinson provided great field position for the Eagles to pull ahead with a 46-yard punt return and the Eagle offense was on a mission from there.

Swope realized the importance of scoring too. In an impressive five play, 29-yard Eagle drive down the field, Swope fought for the go-ahead touchdown right before halftime for his first touchdown of the night.

Going into half, the Eagles were up 10-6 and the GSU defense would ensure that the lead would not change again.

In the second half, both defenses kept the opposing offenses from field goal range, and most of the third quarter was spent trying to get some offensive rhythm in the running game.

The Eagles finally got a drive together about halfway through the fourth quarter. With 8:36 left in the game, Swope scored another rushing touchdown and put the game further out of reach for the Terriers at 17-6.

WC looked to make a comeback, and they were threatening to score with 3:38 left in the game. The GSU defense stopped the Terriers again and forced Reed to kick another field goal for the final score of the game.

After running the clock out, GSU moved to 4-1 in the Southern Conference. Appalachian State University and WC are still in contention to win the SoCon by the end of the year as they both have only one loss each.