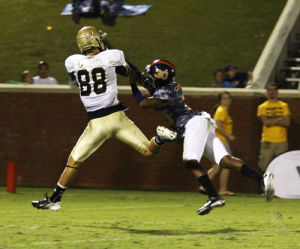 For the 200th time (5-1)Georgia Southern teed it up at Allen E. Paulson Stadium and did not disappoint as they walked away with a 17-9 win over no.4 ranked(5-1) Wofford Terriers.

GSU changed things up with a new camouflage uniform in honor of Military Appreciation Night in front of 20,973 in attendence.

Sophomore B-Back Dominique Swope carried the Eagle offense with 137 yards on the ground and two scores on 25 carries.

GSU managed to hold Wofford to a total of three completions on eight attempts with 27 yards. The Eagle defense pressured both quarterbacks Brian Kass and Michael Weimer with 3 sacks.

The Terrier offense was forced to punt 6 times and had a 26 percent 3rd down completion percentage (4-15).

GSU also held Wofford runningback Eric Breitenstein to 102 yards on the ground on 13 carries. Breitenstein coming into the game was average 178 yards per contest.

The Eagles defense was a “bend but dont break” as they allowed only 4 yards per play to the Terriers and a total of 248 yards and giving up 3 field goals.

With the win Georgia Southern improves to 5-1 on the season and extends their home winning streak to 14.