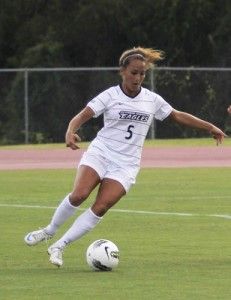 Photo by: Yendi ReidFreshman midfielder Stephanie Gratto dribbles the ball down the field towards the Eagle goal.

Sunday was senior day for the Eagles but it was the freshmen that had the biggest impact.

Freshman midfielder Nora El-Shami streaked down the middle of the field as senior forward Courtney Collins gave her a short pass.

“We’re in a lot of combinations together, and it feels great for her to get an assist tonight,” El-Shami said.

The Terriers responded well to the Eagles goal by creating some solid scoring opportunities, but junior goalkeeper Katie Merson would have none of it.

A diving stop on a deflection right in front of the net kept the score 1-0 going into halftime.

El-Shami was not the only freshman to steal the show on senior day, as freshman midfielder Stephanie Gratto also got in on the act.

Three minutes into the second half Gratto won a loose ball from a defender and sent home a shot from the edge of the 18-yard box.  The goal put GSU in the lead 2-0 and would ultimately seal the game.

The two goals scored on Sunday were double the Eagles output from the previous three games.

“I’m just glad to see our offense come back to life.  It had been a few games since we had scored, so it’s nice to see us get two on the board today,” head coach Lindsey Vanderspiegel said.

With a record of 3-6-1 (7-7-4 overall), the Eagles are in prime position to move up in the Southern Conference with just one regular season game remaining.

Senior midfielder Carlee Storey said, “I don’t think it was our prettiest game ever, but a win is a win.  It feels good to still be in it and still be in pursuit of the playoffs.”

The win over WC gets the bad taste of Friday’s 2-0 loss to the Furman University Paladins out of the Eagles mouth.  GSU couldn’t handle Furman’s disciplined attack and surrendered one goal in each half.

GSU was without senior midfielder Carlee Storey against Furman as she sat out due to a red card she received against the University of North Carolina at Greensboro.

The hyped crowd and the bright lights at Eagle Field did not add up to enough as Furman freshman forward Stephanie DeVita scored her Division I leading 17th goal to lock up Furman’s 2-0 victory.