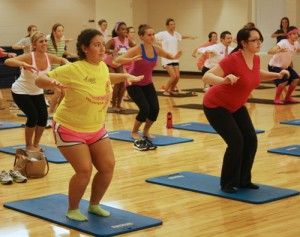 Breast Cancer Research is unique to Zeta Tau Alpha at Georgia Southern University because of what it means to women in the community.

“It’s women helping women. We see the direct effect we have on other women affected. It affects so many people. One in eight women get it, and we don’t know if one of us could get it. We like to influence other women and help,” Kelsey Widem, sophomore justice studies major and second year in Zeta Tau Alpha, said.

Pilates for Pink is an event held by the Recreational Activity Center every year in October. It features students in the Georgia Southern University community coming together to sign up and participate in a few of the four or five exercise classes offered on the night.

“This event will get everyone involved in what ZTA does on a yearly basis. While we focus a lot of our time for special events in October while everyone is active with breast cancer awareness. We actively raise money for our philanthropy throughout the entire year,” Tanner Pritchard, junior public relations major and member of Zeta Tau Alpha since Fall 2010, said.

“This event is a lot different from most of the ones we usually are involved with. Sometimes we can’t reach out to as big a group of people as the students here at GSU, so this should really help to spread the word and help more people become aware,” Vice President of Programming for the Zeta Xi Chapter Katie Griffith, said.

Zeta Tau Alpha’s philanthropy connects its sisters in different ways, allowing them to bond over this cause.

“My aunt actually died from breast cancer. So it was something that really hit home to me,” Rebecca Grave de Peralta, freshman undeclared major and first year in Zeta Tau Alpha, said. “I actually did a walk up in North Carolina in June. The third day for rush was philanthropy day, and when I went up to every house, Zeta was the one that really hit close to home and made me fee like this is where I belong. It’s is something I really wanted to be involved with,” Grave de Peralta said. “Both my grandmas have been recently diagnosed with breast cancer, and my mom also works at a cancer treatment center, so I have grown up watching it. And it’s kind of crazy of what cancer does to people, not just to the person who was diagnosed with it but also the family. It really hits home and it’s a great cause, and hopefully with the money we can help find a cure and help pay for treatment,” Jordan Waters, freshman nursing major and first year in Zeta Tau Alpha.