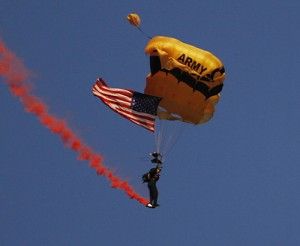 Georgia Southern University holds traditions from yellow school buses to Freedom’s Flight, but for the first time in 30 years the Eagles dawned a uniform other than the Blue and White.

On the Eagles 200th game at home and Military Appreciation Day the Eagles sported a digital camouflage uniform, a red stripe and gray numbers with yellow outlines on the helmet.

Before the game in front of a crowd of almost 21,000 fans, members from all branches of the military were honored, named honorary captains and the Army’s parachuting team, The Golden Knights, parachuted into Allen E. Paulson Stadium.

“Any time we get a chance to respect the military, we do. What we do is so small compared to them” senior safety JJ Wilcox said.

Military Appreciation Day was a big deal since GSU boasts an Army ROTC that has commissioned over 350 officers in the U.S. Army.

“Wearing these uniforms today, playing for our country and our soldiers here in America and overseas really got you hyped up” senior defensive tackle Brent Russell said.

Paulson is a stadium that has seen the 1989 National Championship game played there against Stephen F. Austin to complete a perfect season.

The Eagles won on this historical day against undefeated and number four ranked Wofford (5-1) by a score of 17-9.

Head coach Jeff Monken is no stranger to the military. Before coming to GSU he was an assistant coach at the Navy for five years.

“The kids we’re really excited to wear the uniforms and represent and honor our military. It was a great night.” Monken said.

Not only was the game a historical for the new uniforms for the Eagles, but also they set an NCAA FCS record. GSU did not attempt a single pass the entire game beating the previous record of one pass attempt.