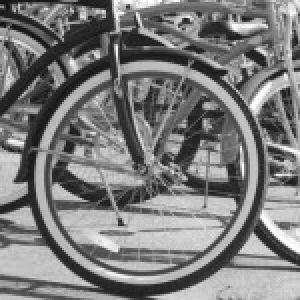 Bikes are a common sight at Georgia Southern University, but The Student Government Association have not heard of any plans to add bicycle lanes on campus.

In the state of Georgia, bikes are classified as vehicles and are supposed to follow the rules of the road.

“The pedestrium is really a sidewalk, and bikes aren’t supposed to ride on sidewalks, but I can understand why they do,” Chief Michael Russell of the Department of Public Safety, said.

There is no bike lane on the pedestrium now, and many students see a bike lane as a useful investment.

Having a bike lane would be easier for pedestrians because then they would not have to worry about getting hit, Demetrius Harper, sophomore human resource management major, said.

“I was leaving the library about two weeks ago, and there was a big bike wreck right outside.  Like the two bikes collided and one person flipped over the bike and a girl’s knee was all scraped up,” William Arrington, junior information technology and music technology major, said.

Things get really chaotic to the point where bicyclists should have their own lane, Elizabeth Grissom, sophomore business administration major, said.

“It would make it easier because there would be less interference with people walking,” Jared Legg, freshmen mechanical engineering major, said.

Bicyclists need to have their own side instead of weaving in and out of people, Emily Mann, sophomore biology major, said.

“It would be more of a hassle, and it would be hard to get people to not walk in the bike lanes,” Thompson said.

There have been no formal incident reports or complaints filed for accidents between pedestrians and bikes, Major Laura McCullough of the Public Safety Office, said.

“(Bicyclists) are supposed to yield to pedestrians so if they are riding down a sidewalk, they should yield to the pedestrians,” McCullough said.

Right now there are no set rules for bikes on the pedestrium, but students can keep themselves out of harm’s way by being more attentive when walking, McCullough said.

“The biggest thing is to pay more attention to your surroundings and to not just be aware of other pedestrians and bicyclists, but also to golf carts on the sidewalks,” McCullough said.

Some bicyclists agreed that sometimes these bike problems and incidents are the pedestrians’ fault.

“Most people text when they’re walking so they have their head down and not really paying attention,” Barry Sobasky, junior geography major, said.

“A lot of pedestrians are walking and texting so they should be more aware of surroundings,” Krystle Haskin, junior exercise science major, said.

Bikers often have to think more and think further ahead when planning to ride their bikes on campus because they have to worry about navigating around pedestrians and barriers on campus.

“It’s really busy with a lot of people.  When going to class I don’t want to worry about hitting anyone,” David Solomon, freshmen mechanical engineering major, said.

“It’s hard to turn in the area where there is construction like around Lakeside,” Claire Torell, sophomore anthropology major, said.

“It can be difficult sometimes, but I generally ride my bike in areas where there’s not a lot of people,” Trevor Coen, sophomore communication arts major, said.

“Early in the morning is fine but from noon to about three in the afternoon is really difficult,” Shelby Poole, junior justice studies and psychology major, said.  “I feel like we pay much more attention so we don’t hit people, so it’s not like I’m texting and riding my bike.”

Many pedestrians are frustrated with bikers because they don’t seem to care about the safety of those walking down the pedestrium.

“It’s aggravating.  They don’t look out for people in front of them and they zoom by,” Kristian Dawson, freshmen exercise science major, said.

“I don’t like how they don’t warn you or say excuse me,” Emmie Sanders, freshmen pre-nursing major, said.

“I feel like I’m going to get clipped by somebody everyday.”  Amanda Lipsey, senior psychology major, said.